Baron Samedi starts creating a zombie army in various parts of Portland in an elaborate plan to help Eric Renard get to Nick. The Baron goes all over Portland from hospitals, to buses, to even just calling someone to fix his unbroken vehicle, to create his army. He kept them in storage units until he had a big enough army to unleash on Portland to cause destruction.

The Portland Police Bureau had many cases to deal with involving the zombie's causing chaos. It often took the police multiple officers to subdue one infected person.

Eventually, Nick, Juliette, Monroe, and Rosalee went to the shipping yard where most of the zombies were being held with the cure. The Baron began opening the various containers with the zombies which overran the shipping yard and led to Nick getting separated from the group. Nick spotted Baron Samedi and they both eventually fell into one of the storage units where the Baron spit his toxin into Nick;s face, starting Nick's zombie transformation.

Captain Renard unknowingly watches as Nick is loaded into the back of a vehicle heading to the airport. He goes into the container where Nick was attacked and is attacked by multiple zombies who he defeats fairly easily. Elsewhere in the container yard, Juliette, Monroe, and Rosalee try to defend themselves until the police arrive. Eventually, Hank, Wu, Franco, and many other officers arrive to the scene. While the police work on containing the zombies, Captain Renard, Hank, Juliette, Monroe, and Rosalee go to the airport after Nick.

At the container yard, after some fighting, the zombies are contained into a single container. On the plane, the Baron learns the hard way that Grimms are effected differently than most people by his toxin. When Nick breaks his coffin lid open, the Baron gives him another dose of spit which doesn't work for long. Nick and the Baron end up fighting and end up in the cockpit causing the Pilot and Co-Pilot to lose control of the plane and crashing it. The crash kills Baron Samedi and Nick escapes into the forest.

Juliette, Monroe, and Rosalee make more antidote and take take it in a vapor form to the container yard where they cure everyone. Near the crash site, Nick enters a bar and is confronted by one of the customers leaving. The man reaches out to push Nick aside, but as soon as he does that Nick hits him down and knocks him out, which leads to many other customers trying to fight Nick, but he easily takes them all down. Eventually the bartender comes out of hiding with a gun. He quietly tries to escape, but Nick sees him and attacks. Nick takes the gun and the bartender runs out. Nick pauses for a second when he sees his reflection in a mirror as he stares at himself and then throws the gun at the mirror breaking it.

Later, Nick wanders around the forest until he hears voices of a family arriving home. He turns his head and stares at them. Monroe struggles to keep Nick's scent from the bar with all of the other smells in the forest. Nick watches as the family arrives home. As they walk up tho their front door, Nick starts running towards them. The husband fumbles with his keys as he panics trying to unlock he door. The family finally gets inside the house and close the door right before Nick gets to them. Nick bangs on the door and punches a hole in the door. He reaches in to unlock the door and walks in as the family runs upstairs to the room where a gun is kept. Nick hears them and runs up the stairs. The family run into a room and close the door. They move a bookshelf in front of it.

Monroe and Hank track Nick to the family's house. Just as the husband gets a gun case open, Nick breaks through the door knocking the bookshelf and the husband down forcing the gun to fly across the room. Nick grabs the husband, but Hank grabs Nick and pulls him away. Hank and Monroe manage to pin Nick against a wall, but Nick breaks free and knocks them away. The husband hits Nick in the back of the head with a gun case, but Nick is unfazed and retaliates. Hank grabs a little statue and throws it at Nick, who hears it coming and reaches up his hand to catch it without looking, surprising Hank and Monroe. Hank and Monroe run out of the room to get Nick to follow them. Hank tells Monroe to go out the back and that he will lead Nick out the front. The plan fails as Monroe accidentally knocks over a lamp on his way by and attracts Nick's attention. Hank gets outside, and Captain Renard calls to get an update. Hank tells him the address of the house and says to hurry.

Hank and Monroe run into a barn near the house with Nick close behind. They climb up to the hayloft trying to figure out how they can stop Nick when Monroe takes a step and his foot goes though the floor. The sound of the wood breaking gets Nick's attention. Hank and Monroe run to the other side of the loft away from the weak ground. Hank pulls out his gun and Monroe grabs a shovel. Nick climbs up and pauses for a second while Hank and Monroe try to get him to recognize them. Nick starts coming towards them until he gets to the flimsy part of the floor and falls through, trapped. Hank and Monroe block the hole Nick fell through to close him in.

When Monroe and Hank walk back outside, Renard, Juliette, and Rosalee are pulling up. Monroe and Hank tell them they have Nick temporarily trapped. Hank, Renard, and Monroe go inside the barn. Monroe and Sean woge as Nick breaks free. Nick climbs out and goes after Renard. He throws him aside and attacks Monroe, throwing Nick into some carpenter wood. Hank tries to attack Nick, but Nick punches him down. Monroe hits Nick over the back with a piece of wood, but it has little effect and Nick knocks Monroe out of the way. Renard hits Nick in the back with a shovel, which leads to Hank kicking Nick in the face and Renard hitting him in the face with the shovel. Nick quickly recovers and pushes both of them away. Hank is draws his gun and begs Nick not to force his hand. Just as Nick is about to charge at Hank, Juliette calls his name and he turns around as Juliette sticks the Piqure-Gigantesque in his stomach. Before she can inject him with the antidote, he hits her across the face. Rosalee quickly runs up and pushes the plunger. Nick pauses, looks down, and pulls out the Piqure-Gigantesque. He stumbles towards Rosalee, and Monroe steps in front of her, and pleads with Nick, before Nick falls to the ground. The gang puts him into the back of Renard's vehicle to take him to the spice shop as the antidote kicks in.

Victims can't be treated until they reach the fourth stage, otherwise the treatment would kill them. To treat them, the central nervous system must be stimulated. There are many ways to administer the treatment including subcutaneously using a Piqure-Gigantesque to administer three simultaneous shots. 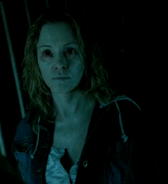 Add a photo to this gallery
Retrieved from "https://grimm.fandom.com/wiki/Zombie?oldid=90270"
Community content is available under CC-BY-SA unless otherwise noted.