When Ziegevolk woge, they grow hair over most of their bodies, their faces become flatter, and their ears become pointed. Like actual goats, they have small horns just above their foreheads and beards on their chins. The skin on the backs of their hands turn black, giving them a very passing resemblance to hooves. Oddly, despite being goat-like, male Ziegevolk have fangs, and female Ziegevolk have horns. According to Monroe, there is an extensive debate amongst scholars as to the number of stomachs Ziegevolk have, either three or four. ("One Angry Fuchsbau")

Ziegevolk have superhuman agility, speed, and are able to jump decent heights and distances when woged. For example, when Nick and Hank tried to arrest Billy Capra, he demonstrated great agility by quickly escaping and running along a catwalk and jumping off of a roof, without showing any signs of discomfort despite the height. Some of these abilities appear to extend into their human forms, as Barry Kellogg was able to outrun Monroe by quite a distance, even though he wasn't woged. ("One Angry Fuchsbau")

The Geruck gland is a gland found just below the hypothalamus in a Ziegevolk's brain. The sole purpose of the gland is to regulate the release of pheromones from a Ziegevolk's sweat glands. By eating live amphibians, more specifically toads, Ziegevolk can stimulate the gland to produce more pheromones than usual. Certain types of toads stimulate the gland more than others. After eating certain toads, a Ziegevolk can produce enough pheromones so that all the Ziegevolk has to do is be near their intended victim to enthrall them. Even males, including Blutbaden with their keen sense of smell, have difficulty avoiding its influence, even if they are fully aware of what's happening. ("Lonelyhearts") Ziegevolk can use the pheromones for more than just inducing romantic feelings. For example, due to consuming a rare breed of toad, Barry Kellogg was able to use his pheromones to make people open to suggestion, enough to actually fabricate false memories from the recipient's perspective. These pheromones were so potent that he didn't require touch to spread them; they would simply spread through the air in close proximity to him. ("One Angry Fuchsbau") In response to this, a neutralizing procedure was developed in the late 1820's.

The Ziegevolk are rather meek creatures and will always run rather than fight. They generally do not intend to kill their victims and are considered lovers, not fighters. They are commonly celebrities in Hollywood, and many are game show hosts. Ziegevolk are often found in bars, where they use their pheromones to lure and seduce victims. They are normally manipulative and arrogant creatures but are often mostly harmless. Ziegevolk that eat toads are not breeders, but herders, a rarity amongst the species. ("Lonelyhearts") The toads stimulate a gland in the brain that controls the secretion of sweat. Larger volumes of pheromone-filled sweat can force anyone to do whatever they say. ("One Angry Fuchsbau")

They greatly fear any threats, such as Grimms or stronger Wesen like Blutbaden and Löwen. ("Lonelyhearts") ("One Angry Fuchsbau")

The goat folk, sometimes [called] Bluebeards, are as a goat; this I saw with my own eyes in Munich in the winter of 1805. They do not seem violent. The danger comes from the instinctive necessity of their race and [they] do not seem to care. Quantity before quality.

Ziegevolk (Bluebeard) are goat-like creatures that were first identified in the Kitzbuhel Alps (south of Rattenberg) in 1895. Their skin releases powerful pheromones that attract and subdue people. This ability is enhanced when they eat Sonoran Desert toads, which make the pheromones even more pungent. Zeigevolks are most dangerous when on the prowl to spread their seed. Famous Ziegevolks include Giacomo Casanova (1725-1798), Frank Sinatra (1915-1998) and John F. Kennedy (1917-1963). The power Ziegevolks have over women is all-consuming; once in the presence of a Ziegevolk, any woman is completely at its mercy.

I have followed and observed a goat-like creature for several days now. I have finally been able to identify him as a Ziegevolk, sometimes known as a Bluebeard. I now know he is responsible for defiling several young women who seem to have fallen under some sort of spell.

Once touched by a Bluebeard, women do not think clearly. I have brushed past one and felt the warm sensation of lust, but I think that long periods of interaction with the creature may cause a woman to hallucinate.

(By Theresa Rubel)
AM I A PSYCHO?


No, seriously, am I making people look like monsters as some kind of coping mechanism?

This guy at the bar was really coming onto me and I was even sorta into him for some reason.

But then he turned into this goat thing and when he looked at me he dropped his glass and ran like I was ugly or something. 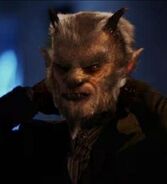 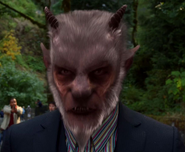 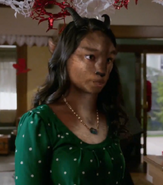 Retrieved from "https://grimm.fandom.com/wiki/Ziegevolk?oldid=196713"
Community content is available under CC-BY-SA unless otherwise noted.