Xavier Arivaca was a Hasenfussige Schnecke who first appeared in "Wesen Nacht".

Xavier was inside his bakery when it was attacked by members of Black Claw. He tried to hide, but he was quickly found and kidnapped, after which he was taken to a warehouse.

At the warehouse, he begged for them not to kill him, and Billie Trump yelled at him to shut up. Dallas Cruz then showed him a picture of Monroe and intimidated him into confessing that he knew who the man in the picture was.

Xavier later returned to his bakery, much to the surprise of Wu, who was interrupted while looking at a spray-painted claw mark symbol that was made on one of the walls.

Xavier was taken to St. Joseph's Hospital, where Wu, Nick, and Hank asked him about the attack and his kidnapping. Xavier lied to them that he never really got a good look at his attackers because he was blindfolded most of the time, but he acknowledged that his kidnappers all wore black shirts and that he was taken to a warehouse. When they asked how he escaped, he told them a story about how he used a brick to repeatedly bludgeon the man that was guarding him after he heard him snoring and realized he'd fallen asleep. He said he kept running after that until he came across the St. Johns Bridge. Nick showed him a picture of the spray-painted claw mark in his bakery and asked him if he knew what it was, but Xavier said he didn't. Xavier was then asked if he could recognize his captors, but Xavier said he couldn't because they would kill him, so Nick said that they knew he was attacked because he was Wesen, which caused Xavier to woge briefly. Xavier said to Nick that he'd heard about him, and Nick told him that they could protect him. He was given an album of mug shots to look at, but when he saw a photo of Dallas Cruz, he did not point him out as one of his captors. When he came across a photo of Billie Trump, however, he pointed her out as a possible member.

Back at the precinct, Billie Trump was brought in as part of a lineup so Xavier could identify her, but he was too afraid to do so. Nick had Rosalee and Monroe come to talk him into identifying Billie Trump as one of the attackers. They told him he could trust Nick, a Grimm, and that they had trusted him with their lives many times. Xavier almost woged due to the stress of the situation, but he regained control of himself and agreed to identify his captor.

Later, Rosalee volunteered to drive Xavier home. In the car ride, she asked him if he was okay, and he said he kept reliving everything and that he thought he'd be killed. Rosalee offered him her sympathies and told him how brave he'd been, adding that they would find Cruz, whom she knew of, along with the rest of his group. Xavier said she didn't know what they were all like and that what they were going to do was crazy, but Rosalee questioned him about this since he'd said they never spoke to him. Xavier started to get emotional, asking Rosalee why she let Monroe go with everyone to the warehouse. As he sobbed, Rosalee started panicking and told Xavier to tell her what was wrong; he eventually gave in and told her, "They made me do it. They made me. I thought they were gonna kill me. I didn't have a choice." Rosalee pulled over and demanded to know if he had set them up, and he just repeatedly said he was sorry. Rosalee's anger boiled over and she punched him in the face before calling Monroe to tell him it was all a set up. As she stayed on the phone with Monroe, the situation seemed to quickly get worse when Monroe dropped his phone and the sounds of fighting could be heard, so Xavier tried to leave the car, but Rosalee stopped him and slammed his head into the dashboard.

He was still in the car with Rosalee, who was able to contact Nick and find out that Monroe and everyone else was alright. Rosalee was told to take Xavier to the spice shop, and when she hung up, she got up in Xavier's face to intimidate him and make sure he wasn't going anywhere.

Once at the spice shop, Xavier tried to explain himself to Rosalee, who wasn't having any of it. Monroe, Hank, and Renard then arrived, and Monroe "greeted" Xavier with a punch to the face. Renard then demanded Xavier to tell him the truth, or else he'd be left with Monroe, and Xavier eventually gathered himself together to tell them how Dallas Cruz and Billie Trump had instructed him what to do and say, adding that they wanted him to join Black Claw. When Monroe asked him what for, he said, "It's too late. They're crazy. They can't be stopped." Hank asked him what they were planning to do, and Xavier answered that they were planning a revolution to "take over" and that anyone who wasn't with them would be killed, adding that there was no stopping them.

As he continued to be questioned, he told them that he was taken to a warehouse and that his life was spared because he knew Monroe, who Black Claw wanted to get to because of his relationship with Nick, a Grimm. He tried to defend himself by saying he would've been killed if he didn't help them, and the stress of the moment got to him as he couldn't keep himself from woging, which disgusted everyone in the room. He says they have to help him and starts to woge despite Monroe and Rosalee trying to get him to calm down. He ends up woging, grossing everyone out. After he retracted and apologized, the gang discussed what they were going to do with Xavier and decided to bring him to the precinct. Hank and Renard went to leave with Xavier, who attempted to apologize again to Monroe, but Monroe held his hand up and said, "Save it."

Xavier was brought to the precinct and placed in a holding cell, and Jed Baim later joined him, being placed in the cell next to him. Xavier turned his back to Jed, who was yelling at the jailer, but when the jailer left, Xavier was unaware that Jed was glaring at him intently, having been given some unknown instructions earlier by Lucien Petrovitch, the leader of Black Claw.

Those instructions soon came to light, however, as Jed acted like he was going to hang himself in his cell. Xavier attempted to call for help and went over to Jed's cell to try to get him to stop, which is when Jed took the opportunity to grab Xavier and tell him that he should have listened to what Billie told him. Jed then woged into his Coyotl form and started bashing Xavier up against the cell bars. The jailer returned, horrified at the sight of Jed in his fully woged form, and Nick, Hank, Renard, and Wu soon came down to the holding cells to try to get the jailer to put his gun down. Before they could do anything though, Jed grabbed Xavier by the throat and ripped it out, killing him. 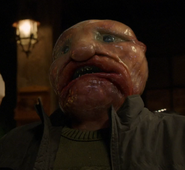 Add a photo to this gallery
Retrieved from "https://grimm.fandom.com/wiki/Xavier_Arivaca?oldid=161910"
Community content is available under CC-BY-SA unless otherwise noted.