William H. Stillman (1826-2016) was an Ataktos Fuse who was one of the earliest settlers in Portland, Oregon. He was the founder of Stillman Square Park, which came to be named after him. Despite being 189 years old when he died, he appeared to only be in his 30's. He appeared in "The Seven Year Itch".

Stillman was born in Tennessee during the winter of 1826. He was successful early on in life and by his early 20's was a wealthy fur trader, but became tired with life as a merchant. Seeking adventure, he sold his business and set off for the Pacific Northwest, where he settled in what was then known as "Oregon Country" in 1854 and claimed a large plot of land. At the time the area was a frontier town, where the men outnumbered women five to one.

He founded Stillman's General Store, the first general store in what is now the center of Portland. His business flourishing, he then developed his land, where a large cabin was built and the forest cleared away for grassland, which was used to farm livestock. Within the early development of the community, he was beloved and known as an eternal bachelor with a fun-loving, generous, and playful nature who would throw frequent banquets and parties.

It is unknown how he eventually bowed out of public life from among his generation. It is clear that he was officially dead by the 20th century, and no one would have had any reason to believe otherwise. His land, which he apparently donated, would become Stillman Square Park and a life-size bronze statue was eventually erected there in his memory.

As his statue indicated, in his natural human lifespan he sported a full beard (which was likely the common fashion of his generation) and wore glasses.

Stillman emerged from the ground in Stillman Square Park after seven years, needing another person to feed on. He looked around the park for a male of his size first, however, so he could replace the rags his old clothing had become. He found Jeremy Tauberg, who called 911 after seeing the current state Stillman's was in, and killed him, stabbing him through the throat in his woged form. He then took his clothes and cleaned himself off in a nearby lake the next morning.

Stillman then went to a diner to eat and ordered so much food, the waitress was even shocked. She asked him what was the last time he ate, and he responded, "Been a while. That's the thing. You can never tell. They always look bigger than they are. But this last one... she didn't last anywhere near as long as I thought she would. She was pretty. That's why. I was distracted by her face." The waitress was very weirded out by what Stillman said, who chuckled as he said he wouldn't make the same mistake again.

Later that night, having gotten dressed in nicer clothing, he went to a bar to find his next victim. He bought a drink for a woman, Mandy, who was flattered by the gesture. Her date, Donald Simpson, however, approached Stillman and made it clear that he wanted him to leave, or else he'd fight him outside. Stillman bought another drink and took it outside to give to Donald, who sarcastically asked William if he was now trying to pick him up. Stillman told him he got him a drink because he felt bad for him since he and Mandy would be having a good time while he wouldn't be. Donald had enough and was about to attack Stillman, but Stillman took him completely by surprise by woging and stabbing him in the throat, killing him. He went back inside the bar and proceeded to continue picking up Mandy, while also getting the bar to be much more lively by buying drinks for everyone and getting the bartender to turn up the music.

Mandy and Stillman soon left the bar, as Stillman took her to the park where he planned to bury and feed on her. Mandy became quite taken with Stillman as he spoke poetically about enjoying life and appreciating what they had. The two shared a kiss, and as Mandy had her back turned to look at the park around them, Stillman woged and knocked her out. He started digging a new burial spot, but Nick, Hank, and Wu arrived to stop what he was doing. He started fighting all three, but they managed to hold him at gunpoint. Mandy, having gained consciousness, then suddenly sneaked up behind him in her woged Taweret state and bit off his head completely, killing Stillman. 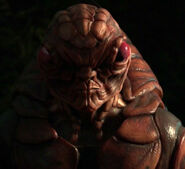 Add a photo to this gallery
Retrieved from "https://grimm.fandom.com/wiki/William_Stillman?oldid=198279"
Community content is available under CC-BY-SA unless otherwise noted.