William Granger was a Drang-Zorn that appeared in "The Bottle Imp".

He was a middle-aged man who went on the run with his daughter, April. His daughter had begun to woge prematurely and was unable to control herself, particularly when she lost her temper. He took her away to try and prevent her from hurting anyone after Lilly Granger, his wife, was unable to handle her.

However, while at a gas station, he briefly lost his temper with Leo Stiles in front of April, and while he went back to his truck to get some cash, April got out of the truck and killed Leo. William came back to late to stop her but saw her kill him.

William knew that police would now be looking for him, so he and April were able to convince a man to give them a ride. An amber alert was announced on the radio, however, and William quickly shut it off. April then commented on hearing her name being said, and the man giving them a ride got suspicious and threatened to drive his truck into a ditch if William did anything. William then woged and knocked the driver out by slamming his head into the steering wheel. He was able to take over the wheel and pull off to the side of the road, where he then put the driver in a tree.

William eventually made his way with April to his underground hideout that he had constructed. He told her that he hadn't expected to be there so soon and that he would have to go in the morning to get some more supplies, adding that they could go hunt for some meat together as well. He made sure April knew to stay inside before leaving the next day, but when he came back from his supply run, he found that the police had located his hideout. He aimed from a distance to take a shot at one of the officers, but when they opened the latch, he fled and headed back towards his house, where he heard from a neighbor that Lilly had been taken to St. Joseph's Hospital. The same neighbor later informed police of this, adding that William was angry.

William made his way to St. Joseph's and found where Lilly was. Following the lead from William's aforementioned neighbor, Nick and Hank found William with Lilly, where he was apparently consoling her. William yelled that they didn't understand as he turned around and woged, but Nick told him he understood better than William thought he did. As Nick arrested William in the hospital room, Lilly explained to them that her husband hadn't done anything wrong and that William had come over to protect her from April because she couldn't control her. William said that April was going through the change earlier than she was supposed to, and William and Lily both told Nick and Hank that what she had done and was doing wasn't her fault because she couldn't control it.

It is unknown whether or not he was still arrested for carjacking Terry's truck and assaulting him. 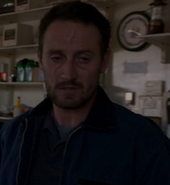 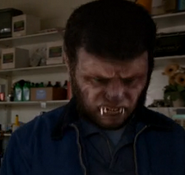 Add a photo to this gallery
Retrieved from "https://grimm.fandom.com/wiki/William_Granger?oldid=199224"
Community content is available under CC-BY-SA unless otherwise noted.