A Wildesheer (VIL-dəs-hair; Ger. "wild army") or Caccia Morta (KAT-chuh MOR-tuh; It. "dead man's hunt") is a wolf-like Wesen that first appeared in "The Wild Hunt".

When woged, a Wildesheer gains a coat of grey fur and a prominently bestial facial visage. The brow over their large, black eyes becomes larger and monstrous in nature. The nose becomes canine in appearance, and the face becomes a short, almost pushed-in snout. The mouth becomes filled with glistening yellow fangs.

Wildesheer are generally large and muscular individuals, and their strength increases considerably when they woge. They are among the strongest and most dangerous Wesen, able to lift a grown man into the air with one arm, and two were able to fight on even terms with and even overpower a Grimm and a Blutbad. They are also very durable creatures, able to shrug off excessive punishment, even when not woged.

Presumably, a Wildesheer's long hair is linked directly to its circulatory system, as three of them bled excessively from the severed locks of hair and died almost instantly after they had their hair cut off by Nick. This appears to be their only weakness.

Wildesheer are ferocious and extremely aggressive Wesen that historically made up the majority of the dangerous Nordic warriors that became known as "Berserkers." Their extremely fearsome battlefield prowess is due to the horrific way in which they fight. Wildesheer enter the battlefield with no fear of death, fighting in a trance-like state of murderous fury. They take down opponents by way of a broken neck and coat themselves with the blood of their victims. In addition, they will scalp their defeated enemies and sew the various scalps into a cloak that they will don for their next battle. The Wildesheer supposedly draws from these scalps, the power of those they once belonged to. This seems to actually work, as one Wildesheer shrugged off a close range shot from the Siegbarste Gewehr; likewise, one of Nick's ancestors wrote that it makes them invulnerable to all known weapons.

In the modern day, Wildesheer will target powerful people in uniform (state troopers, police officers, military veterans, etc.) who are considered modern day warriors and continue their gruesome tradition of scalp collecting. They appear to hold a level of respect for their opponents, deeming them worthy before scalping them. Wildesheer also lead generally nomadic lifestyles, traveling from city to city to find worthy victims, but aren't above hunting in small groups.

Due to their obsession with fighting warriors, Wildesheer are willing to hunt Grimms. They've been known to start entire hunts for one, and they have been doing this for centuries. Upon arriving before the confrontation, there is a storm of lightning, thunder, and wind, as if the beasts are "blown out of hell."

Due to their prowess, Wildesheer are greatly feared throughout the entire Wesen community. Blutbaden tell stories of Wildesheer killing Grimms to their children.

Most of what we know of the creature was lost with the burning of the library of Alexandria. They are ferocious trained warriors used in battles as the first strike regiment. Usually nomadic. Wildesheer can be used and manipulated by their own ego, as they constantly seek out challenges to prove their own prowess.

Known by many different names, these Wesen go into a rage on the battlefield with no fear of death, mad as hounds, faces smeared with blood of victims, fighting in trance-like fury, scalping their defeated enemies.

They sew these trophies of war into cloaks of hair, supposedly giving them the power of the warrior they've defeated. These Wesen achieve such fearsome reputations, they also became known as Berserkers.

The vile cloaks of scalped hair they wear into battle seem to protect them from weapons, making them nearly invulnerable. I do believe that, like Samson, they have a weakness. If one could take their hair as they had taken the hair of others, it would weaken them - but I was unable to get close enough and was forced to retreat before I could test my theory. 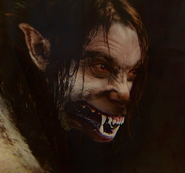 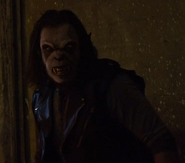