A Wettbewerbsgewinner (VET-buh-veyʁbs-guh-VIN-uh; Ger. "competition winner") is an avian + reptilian-like Wesen that first appeared in "Into the Schwarzwald".

When woged, they are covered in an array of hard scales, spines, and beautiful feathery plumage. There is a lot of variation among the species, as both their scales and plumage come in a wide spectrum of colors. The jagged quality of their scales give these beasts an intimidating appearance, and their nose is a bit snout-like while still maintaining distinguishable reptilian qualities. Their hands also gain sharp claws in their woged form, and both their plumage and eyes glow.

Not much is known about their behavior, though they seem to be loyal to those they serve. They do not possess superior intelligence and are capable of being easily tricked. They do not fear Grimms nearly as much as other Wesen do. 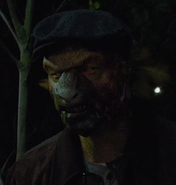 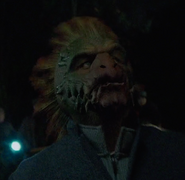 The original artwork by Jessica A. Short: 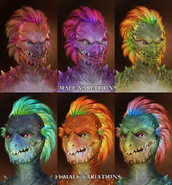 "We chose this submission because of its unique artwork and her clear passion for the show. This Wesen fits into the Grimm world seamlessly and her style is similar to that of the conceptual artists on the show. Thanks to all of our fans who participated. We enjoyed looking at all your submissions."[2]

Retrieved from "https://grimm.fandom.com/wiki/Wettbewerbsgewinner?oldid=195576"
Community content is available under CC-BY-SA unless otherwise noted.