Weston Steward was a Hundjäger and an FBI Agent who first appeared in "The Law of Sacrifice".

Rispoli and Viktor called Weston and sent him pictures of Adalind and Captain Renard. They told him to confirm they were together right away. Viktor added that they were on their way to Portland.

Weston went into Renard's condo building, and Kelly followed him in. Weston showed a picture of Adalind to the building guard at the front desk and asked if he had seen her in the building recently. He told the guard that she was a witness in a federal case, and the guard said he was pretty sure he had seen her. Weston asked if he could check the security footage to make sure and the guard let him look. When Weston confirmed Adalind was with Renard, he left and told two Verrat agents Renard's condo number before he headed back to his car. Before he got in, Kelly surprised him and slammed his head into the car, knocking him out. When Nick came out of the building, Kelly told him about Weston and the fact that he was an FBI agent. She took Nick to Weston's car and told Nick that he knew Adalind was upstairs with Renard.

When Weston woke up, the condo building was being swarmed by police, so he drove away.

In his house, Weston poured a drink and wondered, "What am I going to tell them, they are going to kill me." Kelly, standing behind him after breaking into his house, asked him if he was talking about the Royals. Weston woged in surprise that someone else was in his house. He started walking towards Kelly, but Nick and Renard also appeared. Renard punched Weston, knocking him out. Once Weston woke up, he was interrogated by Renard. Renard punched him a few times and noticed that the last call on Weston's phone was from Vienna, so he called it back, but he hung up after a few seconds. He woged and grabbed Weston's throat after asking who called. Weston said it was Rispoli, and he said that Rispoli and Viktor were on their way to Portland for the baby. Nick told Weston that if he didn't do what they said, then he would be arrested because they could connect him to the two dead Verrat agents at Renard's condo building and being on the payroll of the Royals, among other things. Nick gave Weston a piece of paper with an address on it to "where the baby is" to give to the Verrat and Viktor when they arrived.

Viktor and the Verrat arrived to Portland in a private plane as Weston got out of a limo to greet them. Weston handed the note Nick gave him to Rispoli. Rispoli asked if he was sure the baby was at that address, and Weston said that's probably what they wanted them to think. Viktor asked who "they" were, and Weston told him, "Renard, the Grimm, and some woman." Weston then asked Viktor if he minded if he took care of Renard when this was all over, and Viktor said he didn't mind. Viktor, Rispoli, Weston, and a couple other men got into the limo and drive off. Inside the limo, Weston told Viktor and Rispoli that the address on the paper led to an old warehouse, which would be a perfect place for them to get ambushed.

After Viktor spoke to Renard at the precinct, he returned to the limo where Weston and Rispoli were waiting. Viktor told them it bothered him that he didn't know who the woman was that was with Nick and Renard, and when Weston said she wanted to kill him, Viktor found it interesting that she was more aggressive than the men.

When Renard left a hotel bar, Weston got out of his car and started following him. He pulled out a gun, but before he could shoot Renard, a bus drove right in front of him. Many people got off the bus, causing Weston to lose track of Renard. Once he found him again, Renard was already driving away.

The next day, Renard mentioned to Nick that Weston hadn't been showing up for work and wasn't communicating with anyone. He also mentioned that he thought he saw Weston on the streets the night before.

In a hotel, Weston watched as Josh Porter got into an elevator as another man followed before the door closed. A little while later, Weston walked into Josh and his father's hotel room where he found the man in the suit, who was a member of the Verrat Ahnenerbe, dead. Weston woged and ran out of the room.

The next day, Weston called Josh, posing as a "Detective Donovan," to figure out where Josh and his father were. Thinking it was a detective calling to help them with the case at the hotel, Josh told him he was at St. Joseph's Hospital.

That night in the hospital parking lot, Weston sped towards Hank and forced him to jump to safety. Another man got out of Weston's vehicle as Nick and Trubel arrived. Weston drove off, and a fight broke out soon thereafter.

In an unknown location, Weston opened up a vent and pulled out a case containing passports with his picture but with various names and money for multiple different countries. He took out a Canadian passport with the name "Walter Rathenau" and left.

As Renard left Nick and Juliette's home to give Nick the antidote for Adalind's potion, Weston shot him 3 times in the stomach/chest, causing him to fall back into the house. Weston entered the house and saw Trubel. She ran as he shot at her and chased her. Trubel ran upstairs to her room and closed the door. She put a chair against the doorknob as Weston tried shooting through the door. Weston broke through Trubel's door and said she was in the wrong place at the wrong time, but he added that he wouldn't shoot her, so he put his gun away. In the meantime, Trubel grabbed her machete from by her bed without him noticing and hid it behind her back. Weston woged to attack Trubel, but he immediately realized she was a Grimm. She kicked him, causing him to stumble and fall out of the room. She quickly ran up to him and cut off his head, and his head rolled down the stairs. 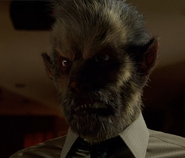 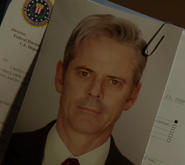 Retrieved from "https://grimm.fandom.com/wiki/Weston_Steward?oldid=195158"
Community content is available under CC-BY-SA unless otherwise noted.