A Wendigo (WIN-dee-go; Eng., from Ojibwe wiindigoo "wendigo," a legendary possessing spirit) is a cannibal-like Wesen that first appeared in "To Protect and Serve Man".

When woged, they grow short, snow-white fur over their body, their teeth develop into needle-like fangs, their eyes turn yellow and appear to glow, their ears elongate, and their nails grow into long curved claws, which they often use in fights. Wendigos also have a distinctive brow ridge that curves downward in a half-U shape at the outer ends of their brows, before smoothly transitioning with the rest of their heads. Female Wendigos have a much more subtle woge, but they still gain the fangs, brow ridge, and wrinkles. Their hair remains, but the color changes to a shade of gray.

Unlike many Wesen whose voice remains unchanged or becomes deeper when they woge, Wendigos gain a higher pitched voice.

It is unknown how strong they are because a human, Craig Ferren, was able to handle two Wendigos, though not at once, and he was even able to kill one and severely injure another (albeit with a gun), while Hank was able to handle one by himself. It should be noted, however, that both gentlemen were big men and trained fighters (a soldier and police officer, respectively), and in turn, stronger than average. On the other hand, a single Wendigo was able to fair quite well against a Grimm, even after it had been wounded.

They are at least more durable than humans, able to run away moments after an intense fight. It also took several bullets from a handgun to kill one, even at close range.

In the distant past, Wendigos were savage cave dwellers in which they carelessly stored the remains of their victims. In modern times, however, Wendigos have been forced to adapt, and now store the remains of past meals in pits located in the basements or crawl spaces of their homes.

Despite adopting a more civilized veneer, Wendigos are extremely savage when provoked, since one of Nick's ancestors stated that he was lucky enough to get away with his life after a direct confrontation with one. Even so, like most Wesen, Wendigo fear Grimms, as demonstrated by John Kreski's reaction to Nick. However, they will still fight with them. It should be noted that if they get wounded, they become more ferocious.

They appear to be sadistic creatures, as they enjoy mocking their prey before eating them.

The Anishinaabe, Ojibwe, and Cree Native Americans all observed compulsive cannibalistic behavior in some individuals. It was said that if someone consumed human flesh, they risked the danger of accidentally becoming possessed by a demon, which would cause the human to take on the demon's form. The demon, known as a Wendigo, would drive the human into a compulsive cannibalism known as "Wendigo psychosis." The widespread fear of the Wendigo led to a social taboo around cannibalism.

Legend also had it that the Wendigos' hunger could never be sated. Wendigos would compulsively eat human after human, and as it consumed more, it would become larger, causing the stomach to never become full. As a result, a Wendigo that had consumed several humans in a short time would become very large.

After the disappearance of the magistrate and his wife, I tracked what I believed to be a Wildermann through Starksboro into the Camel's Hump forest. It was there I first heard of the mythical Wendigo from the chieftain of the Algonquian tribe that had provided me refuge for the night.

I soon learned that these terrifying beasts are no myth. I came upon the cave of the Wendigo, rife with human remains, having been the scene of many murders and cannibalistic acts.

Two days later, I encountered the Wendigo himself. His eyes seemed to glow. His breath was hideous with the horrible stench of burned flesh. I made the terrible mistake of wounding him, which only made him more ferocious. I was lucky to escape with my life, as I surely would have been his next dinner guest. 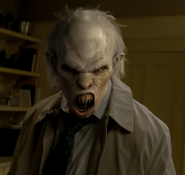 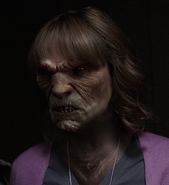 Retrieved from "https://grimm.fandom.com/wiki/Wendigo?oldid=199253"
Community content is available under CC-BY-SA unless otherwise noted.