Walter Dempsey was a Hässlich and a member of the Secundum Naturae Ordinem Wesen. He first appeared in "The Last Fight".

He, along with another masked man, sat in a vehicle outside the spice shop.

The masked men threw a brick with a wolfsangel on it through one of the spice shop windows and drove off.

"The Grimm Who Stole Christmas"Edit

He was at Shaw's house with other Secundum Naturae Ordinem Wesen members when Trubel, Bud, and Josh Porter were trying to collect names of the group members.

He was in the forest as the tribunal for Monroe was getting ready to begin.

He was at Monroe's tribunal when Nick, Hank, Wu, Juliette, Rosalee, and Renard arrived. He was about to escape when Hank cornered him. He woged and tried to escape again, but Renard showed up, woged, and killed him. 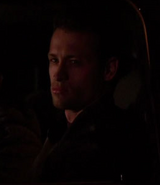 Add a photo to this gallery
Retrieved from "https://grimm.fandom.com/wiki/Walter_Dempsey?oldid=141194"
Community content is available under CC-BY-SA unless otherwise noted.