For the episode, see Volcanalis.

Volcanalis (vohl-kuhn-AL-iss; Lat. "The Flamen of Vulcan") was a demon that appeared in "Volcanalis". It has an affinity for volcanoes and has been known for its destructive wrath.

Volcanalis is a towering humanoid demon made of pure magma. It is an exceedingly dangerous enemy when provoked, for the heat it emits from its body instantly affects those that come into proximity with it, suffocating live beings and evaporating liquids almost instantly. It cannot be harmed via conventional methods, as its molten hide will only melt any detrimental factor that tries to penetrate it. The only known way to subdue one would be to introduce it to sub-zero temperatures, freezing its anatomy enough to freeze it in place. Once frozen, the beast can be shattered with a well-aimed blow. It will still be alive for a few seconds after being shattered, as evidenced when its eyes continued to move around in "Volcanalis".

It has been known to take residence within mountains, coming out only to exact vengeance upon those who dare to take its "property," or the stones found close to its habitat, making it very territorial and possessive. Once alerted of the theft, the Volcanalis will hunt down the perpetrator.

It seems to have an affinity with the earth itself, being able to track those who took the rocks found within its abode. It travels around underground, smouldering the earth itself to get close to its target.

According to Wu, there were multiple unresolved incidents on file where rocks were taken from active volcanoes around the Ring of Fire, only for the perpetrators to die under mysterious circumstances. He also noted that ancient cultures in the area stated that "there is hell to pay" if any rocks were stolen from any volcanoes because they were considered sacred.

Having encountered the molten beast twice before, I enlisted the help of the high priest before I had the courage to return up the mountain. Many of the dwellers of Pompeii had removed rocks. When we discovered the bodies of these villagers burned and blistered, the priest uttered one word before he ran for his life; Volcanalis. Too frightened to face it on my own, I retreated just in time as Vesuvius sought revenge: erupting and burying Pompeii. I returned to Rome where I was to learn that Volcanalis had often been mistaken for the ancient serpent, Satana. But unlike Satana, Volcanalis lived within the mountains of fire, frequently appearing prior to violent eruptions as I had so recently learned.

Volcanalis is thought to have been responsible for the eruption of Mount Vesuvius, which devastated the Roman city of Pompeii in the first century AD. 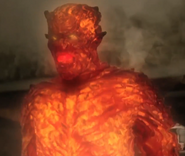 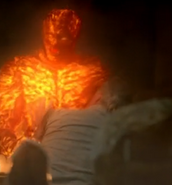 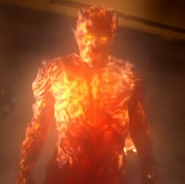 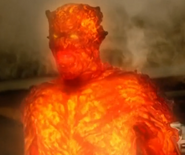 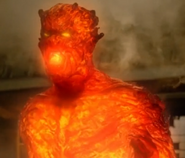 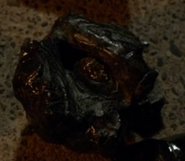