Vincent is a Glühenvolk that appeared in "Endangered".

Vincent and his very pregnant wife, Jocelyn, were traveling across country, heading to Alaska where there were more Gluhenvolk. He had to remove the ovaries from cows to feed to Jocelyn, which attracted the attention of the police including, Nick Burkhardt. He was seen in his woged form by Robert Hadley after Vincent pushed John onto a fence post and inadvertently killed him; Hadley described him as an alien to both Nick and (later) George Lazure.

As their old truck had broken down, he had to steal Maureen Rodriguez's Bronco. He did this by letting her see him while woged, and when she crashed and knocked herself out, he took the truck. He left her in the barn where he and Jocelyn were hiding, believing she had been abducted by aliens.

He was out getting more cow ovaries when Lazure shot at him and missed (hitting the bag of fresh cow ovaries he was carrying). He arrived back at the cabin just as Jocelyn gave birth with the help of Rosalee, Monroe, and Nick.

He was last seen heading to Alaska with Jocelyn and the baby in Lazure's truck after Nick shot and killed Lazure with his own gun. 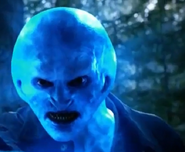 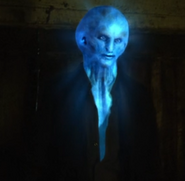 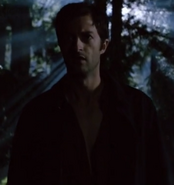 Add a photo to this gallery
Retrieved from "https://grimm.fandom.com/wiki/Vincent?oldid=131731"
Community content is available under CC-BY-SA unless otherwise noted.