Officer Vick was a police officer at the North Precinct and a member of Black Claw who first appeared in "Set Up".

He spoke to Nick and Hank when they arrived at Hank's house, which had been declared a crime scene after two dead bodies were found inside. He told them that officers were already inside investigating the scene and that they'd definitely want to talk to Hank.

"The Beginning of the End"Edit

At the North Precinct Justice Center, where Black Claw had captured Nick and was holding him hostage, Eve entered and demanded to know where Nick was, and both Officer Vick and Officer Johnson first told her that he wasn't there. However, when Eve telekinetically forced the officers to draw and point their guns at each other, Officer Johnson confessed that Nick was being held upstairs. 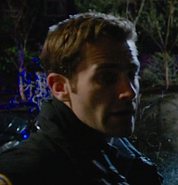 Add a photo to this gallery
Retrieved from "https://grimm.fandom.com/wiki/Vick?oldid=180770"
Community content is available under CC-BY-SA unless otherwise noted.