Edit
watch 01:36
We're Getting Mutants in the MCU - The Loop
Do you like this video?
Play Sound

A Vibora Dorada (vee-BOHR-uh doh-RAH-duh; Span. víbora dorada "golden viper") is a chimeric snake-like Wesen that appeared in "Silence of the Slams".

When woged, Vibora Dorada gain sharp fangs that they can use to inject a paralyzing neurotoxin into their victims. Their noses widen, and their skin becomes more reptilian and turns a brownish gray, with highlights of a greenish-blue and dark purple around their mouth, the sides of their face, and along the unique spear-shaped extensions of skin that grow from their head. Resembling the Aztec deity Quetzalcoatl, it is not entirely clear what these extensions are for, but the Vibora Dorada does have the ability to control the movement of these extensions. It is possible that one such purpose for these extensions is to intimidate their victims, much like the frilled-neck lizard spreads out its frill as part of a deimatic display. The hands of Vibora Dorada are also reptilian, and their fingernails get much darker in color when they woge. These creatures are also fairly quick, more than capable of running in to bite their victims before they can react. If a woged Wesen becomes paralyzed by their toxic bite, it will stay in its woged form.

Most Santeria priests, or Santeros, are comprised of Vibora Dorada. In Aztec mythology, Xipe Totec was a deity of life, death, and rebirth, among several other things, and he was known to flay his victims and wear their skin, absorbing their power in doing so. This practice was both worshiped and imitated by Aztec warriors, and in modern times, Vibora Dorada, particularly those that are Santeros, continue the practice with the skin of other Wesen. Their ability to paralyze others with their toxic bite allows them to then flay their victims' faces and make masks out of them, which Santeros imbue with the ability to transfer the Wesen's power onto its wearer, including Kehrseite. Vibora Dorada who become Santeros make other potions as well, but they take the practice of making powerful masks extremely seriously, going to the extent of signing a contract in blood, along with the owner of the mask. They are quite dedicated to their craft but can be absolutely ruthless and cold-blooded when they kill.

Xipe Totec, worshiped by Aztec warriors, was known to flay his victims and wear their skin. It was believed that in doing so, he absorbed their power. Warriors imitated Xipe Totec and created skin masks to help them gain strength during battle.

This practice has been adapted into present day by Santeria priests, or Santeros, mostly comprised of Vibora Dorada. The Santeria priest flays the Wesen epidermis and imbues the mask with the ability to transfer Wesen attributes onto its owner through the mask, even Kehrseite.

By the time he realized the mask had possessed him, it was too late. The face of the Wesen proved more powerful than the man beneath it. And I discovered the only way to remove the mask was through the Ceremonia de Desgracia, a brutal and painful process to reverse the work of the Vibora Dorada. But even though this was successful, I believe when subjected to multiple personalities at the same time, the human mind has only one escape: to go completely mad. 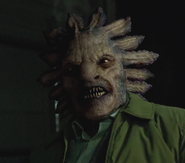 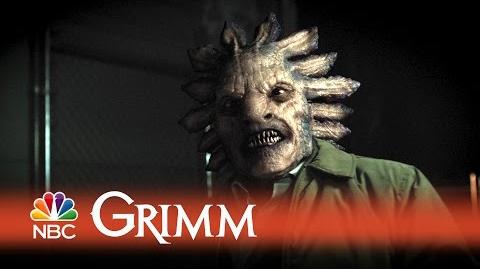