View source
watch 01:23
Wiki Targeted (Entertainment)
Do you like this video?
Play Sound

A vambrace is a leather forearm protector. The one Nick owns was created specifically to battle Gelumcaedus. It features a double-edged, ten-inch, retractable blade with a serrated edge. A vambrace is extremely durable, able to withstand the crushing bite of a Gelumcaedus.

Nick finds his vambrace in the trailer. He puts it on his wrist and discovers the hidden blade. He also notices it has an image of a Gelumcaedus on it, so he brings it with him to the sewers when he and Hank go looking for Gregorek to arrest him. When they find him, Gregorek tries to bite Nick's arm, but the vambrace protects him from any injuries.

Later after Andre kidnapped Hank to get Nick to free Gregorek from jail, Nick brought the vambrace with him again. Once Gregorek, Andre, and their brother attack, Nick uses the hidden blade to kill everyone except Gregorek.

Nick wears the vambrace while he is fighting Kenneth, and when he is able to get the upper hand in the fight, he declares, "For my mother," and stabs Kenneth in the neck with the hidden blade.

The vambrace was very briefly seen in the epilogue, stored in the weapons cabinet of Nick and his family's new and improved trailer. 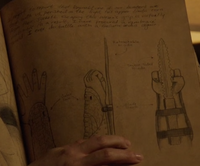 فارسی
Community content is available under CC-BY-SA unless otherwise noted.