Start a Wiki
A Few Thoughts on Cry Havoc

As I mentioned in the Grimm Survivor #1 - Season 4 Episodes thread, I wanted to share my thoughts about an episode that I personally regard as one of the best––and probably, one of the most important––in the show to date. There's a lot of great episodes that have come along over the course of the 4 Seasons of Grimm so far, and while some may debate how good "Cry Havoc" really was, it's tough to argue that at the very least, the Season 4 finale will surely go down one of the most memorable episodes in the show's history.

The finale picked up right from the emotional ending of "Headache" (a very important episode in its own right), an ending still so painful to rehash that I'll just say I shut the TV off once the credits started rolling, took a deep breath, and sat down a few more minutes just to process what I'd just seen. We're brought right back to that painful moment for Nick, and I think the picture below pretty much says it all. Nick's journey might have actually ended right then and there if it weren't for Trubel helping snap him out of it for the time being with the Verrat ready to pounce. Nick's raw emotion and vulnerability in these initial moments of the episode are few and far between for this show, but it helped remind me that while Nick is very tough and not anyone to mess with, he's still human and has very few close family members left, if any now. The latter has made him a strong and independent person, but at the same time, it's undoubtedly been a painfully traumatic part of who he is too. Wanting Kelly to be a part of his life so badly and actually having had that come to fruition, only for it to be ripped away so soon without getting to really spend quality time together... I mean, that was the ultimate set-up for an epic revenge-driven episode, as well as Season 5. 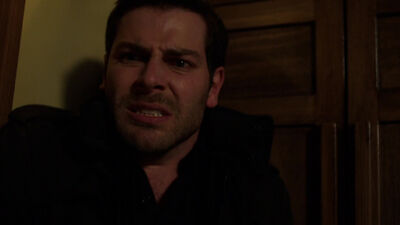 I loved the whole staged crime scene in the hotel. We've seen the gang have to manipulate or maneuver their way through some Wesen crimes many times, but for them to actually manipulate/make up an entire crime scene in order to get vital pieces of information? Well done! Watching Nick, Hank, and Wu go through the whole charade of getting info on the crime scene and then Adalind pretending to be a victim in all of it was pretty funny, and Adalind delivered one of the several great lines of the episode: "I almost went into labor with all that screaming." (Imagine if she had!)

We also got a quick look into the window that is Adalind's newfound empathy when she reached out to Nick and gave him her condolences. I'm not sure if I'm ready to change my view of Adalind, but she certainly has started to build up some good will. That moment was a bit unexpected and refreshing to see. Nick and Adalind actually have a lot more in common with one another now than just their child.

Laugh-out-loud moment #1: The way King Frederick delivered this line about Nick: "This Grimm is really becoming annoying." Oh, Frederick, if you only knew what was to come...

Nick and Kenneth's showdown was absolutely one of my favorite moments from the show for any season. It's up there with Nick and Renard's "face off," Nick and Kelly's fight with a Mauvais Dentes, and any other fight you may consider to be particularly memorable. This felt different though for Nick because it was more personal than ever, and the trash talk before the fight began was just A+ stuff. Unfortunately for Kenneth, he couldn't back up his talk quite as well as Nick. The way Nick finished Kenneth off was absolutely brutal too, even for Grimm, and maybe a sneak peak of what we'll be seeing more of from Nick. The reappearance of the vambrace too was awesome; for a while there, I wondered if Nick was going to try to beat Kenneth to death Seelengut style. Overall, just a very badass moment for the show. I am a huge fan of the 24 series, so if Nick just starts turning into Jack Bauer, I'm all for it haha.

Similar to the reappearance of the vambrace, it was great to see a whole slew of weapons all appear in the same episode, also offering the fans reassurance that there were still plenty of weapons that survived Juliette's trailer rampage. (R.I.P. Super Soaker)

Laugh-out-loud moment #2: This episode was largely very dark and bloody, but Bud still had a great moment of comedic relief with Rosalee as he commented on how the old Juliette and "not the crazy new one" was so perfect for Nick (more on this later), before suddenly smiling and wondering aloud about Nick and Adalind, "I wonder what they're going to name the kid." That prompted the following, absolutely classic "are-you-serious" look from Rosalee: 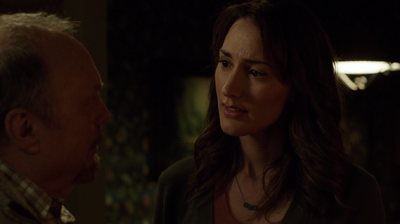 What can you say about the battle in the castle? (I know they weren't actually fighting in a castle, but it just sounds better that way.) The way they stealthily took out a few of the guards was fantastic, and then just as great as Nick's fight was with Kenneth, we were given even more gems with Wu comically tossing away the Three Bladed Knife and just dealing with a Hündjager the only way he knew how, Monroe proving Blutbaden can still handle a Hündjager Wesen-a-Wesen, and Hank's hand-to-hand combat with Rispoli. I still wonder why Rispoli never woged in the history of the show, but I'll at least give him credit for fighting Hank honorably, even if it meant Hank gave him an express trip back down to the first floor: 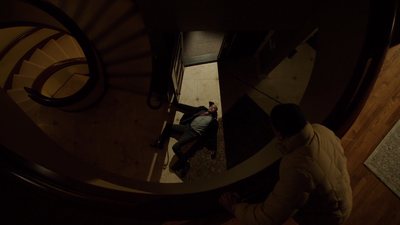 As much as I enjoyed all the things I've already mentioned in the finale, there was one moment that topped them all for me––the surprise appearance of Meisner, who hadn't been seen since he decided it was best to disappear for a while in episode 17 of Season 3. More than a season's worth of episodes later, he appeared out of nowhere, in the King's private helicopter of all places, and remarkably threw Frederick out of the helicopter without hesitation. The moment was equal parts thrilling, shocking, and celebratory, a nice change of pace for this episode, and it created what I think is one of the most intriguing cliffhangers of the finale, which is what will Meisner do with Diana, and what will now happen to the Royals, who absolutely suffered several devastating blows just when it looked like they had everything going for them. 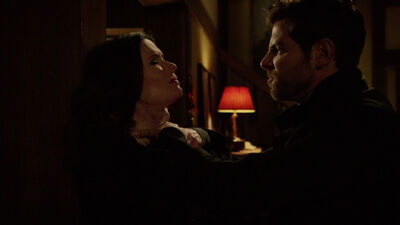 That brings us to the emotional climax and ending of Nick and Juliette's relationship, which truly turned into an extreme love-hate relationship by the end. Though it had momentarily appeared as if Juliette would end up in Vienna much like Adalind in the finale of Season 3, she still had unfinished business with Nick. There have been a lot of great comments on this scene from several users on this wiki, and it's made me realize that Juliette likely returned to try to explain herself, but she knew that either she would die, or Nick would. As Juliette told Nick, she probably still loved him, even after her transformation into a completely different person, both physically and personality-wise. That may be why she ultimately still felt compelled to finish things, as if their relationship was still owed that, and her feelings for him may have been why she gave Nick the first opportunity to strike, as seen above. While Nick was able to stop himself from doing something perhaps he wouldn't have been able to forgive himself for, Juliette had no such remorseful emotions any longer. For likely the second time in the same episode, Trubel was able to help save Nick yet again. I thought that was great writing to have these instances both begin and end the episode, so props to Thomas Ian Griffith.


I'm sad to see Juliette go, especially when looking back at how great Nick and Juliette were together in Season 1. Having gone back and rewatched a few of those episodes, there were a lot of nice moments they had that I couldn't help but appreciate a little more. As Juliette lost her humanity more and more, I hated the things she did, but I really have to hand it to Bitsie Tulloch––she did a great job suddenly playing an evil role. It's going to be interesting to see how this changes Nick and his own humanity. How much can one man (well, Grimm) take? I hope Season 5 has a few happy moments in store for Nick, but I doubt those will happen anytime soon. I'm looking forward to Chavez and Nick encountering one another once again, though the same probably can't be said for either of them!

* * * *
I appreciate you reading this blog if you got this far and hope you enjoyed it! Feel free to comment below.
Retrieved from "https://grimm.fandom.com/wiki/User_blog:Grimmaniac/Better-Late-Than-Never_Cry_Havoc_Review!?oldid=134813"
Community content is available under CC-BY-SA unless otherwise noted.