Grimm Wiki
Register
Don't have an account?
Sign In
Advertisement
in: Rewrite, Objects, Season One Objects,
and 7 more
English

The trailer was a 1963 Airstream Globetrotter. ("Season of the Hexenbiest") It was once the location of all of Nick Burkhardt's weapons, tools, and lore for his duties as a Grimm.

When Kelly Burkhardt and Marie Kessler were faced with their father's terminal illness, they purchased an Airstream Globetrotter and moved 17 trunks' contents into it from their father's basement. ("Game Ogre") ("Bad Teeth") These items included Grimm diaries, weapons, substances, and many other secrets summing up their knowledge of the world of Wesen. When Kelly left in pursuit of the men who thought they'd killed her, Marie took the trailer to her home in Montana. ("Bad Teeth")

In "Pilot", while Nick was still at work, Marie arrived at the home Nick shared with Juliette Silverton, and she brought with her the trailer that Nick had never known she owned.

After Marie's death, Juliette watched from a window as Nick drove the sport utility vehicle away from the residence with the trailer attached. ("Bears Will Be Bears")

Nick first returned to the trailer to do some research on Mellifers. A bee observed him through the vent in the roof of the trailer. ("Beeware")

Beginning with "Danse Macabre", the trailer's location was revealed to be in the Forest Hills Storage yard until it was moved into the middle of a forest in "Blond Ambition".

In "Iron Hans", Juliette angrily torched the trailer and its contents as she became increasingly corrupted by her transformation into a Hexenbiest, using Spirit Oleander as an accelerant. She then called Nick to brag about what she had done. In "You Don't Know Jack", Nick, Hank, Monroe, and Wu surveyed the damage within the trailer and brought the contents that were salvaged back to the basement of the spice shop. Although most of the weapons came through intact as the weapons cabinet was relatively untouched, a fair portion of the Grimm books were lost. 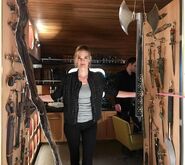 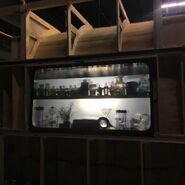 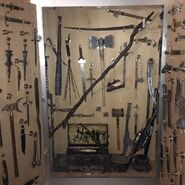