Anthony "Tony" Talamonti (born May 1, 1982) is a Kackenkopf member of Black Claw. He used to do drugs with Rosalee in Seattle and once worked for a hacking organization called Robotomy. He first sent a letter to Rosalee in "Maiden Quest", he was first heard on the phone in "Star-Crossed", and he was first seen in "Into the Schwarzwald".

Tony entered the spice shop and rang the call bell. Rosalee came out and immediately recognized Tony, and he asked Rosalee why she hadn't answered the letters he sent, adding that he checked the address and knew that she got them. Rosalee tried to tell Tony that she had moved on with her life, but he cut her off and said he needed her help. Rosalee said, "The kind of help you need, I-I can't give you." Tony asked what that was supposed to mean, and Rosalee tried to avoid getting into an argument. He told Rosalee that she owed him because he went to jail after he stole drugs for her, but Rosalee countered that he only stole the drugs so he could get high with Carlos. Tony then said he had no one else to turn to for help and that he needed $5,000. After Rosalee said he needed to leave, he took a glass of some spices and threw it at Rosalee, who managed to dodge it. He accused Rosalee of thinking she was better than everyone because she'd straightened herself out and said she should know better than to piss him off. He started knocking various items off of some shelves in the shop, and Rosalee told him to get out and tried to get him to stop. Tony then hit her in the face, knocking her to the ground, at which point Adalind came in and told him to leave Rosalee alone. Tony asked how much money she had, and Adalind told him she was calling the police. Tony then said, "The hell you are," woged, and started walking towards Adalind, who suddenly grabbed her stomach in pain. He retracted in front of Adalind, who was doubled over, and then went to hit her, but his hand was suddenly stopped in mid-air as Adalind's face rippled. One by one, Tony's fingers were telekinetically snapped backwards, each digit breaking as he howled in pain, before he hurriedly rushed out of the spice shop.

Zuri Ellis gave Tony Hank's cell phone for him to extract data off of, telling him that it had been in his jacket. She asked him how long it would take, and he told her that it would take however long it took. He told her to leave the door unlocked, and he then went to his car parked down the street and started extracting everything from Hank's phone to his laptop.

Tony reentered the house and put Hank's phone back in his jacket, not knowing he had placed it back in the wrong pocket. Unfortunately for Tony, he had left the door open, and the wind blew it shut, waking up Hank. Before he could leave, Hank caught him, and the two started fighting, but Hank was able to overpower Tony, who was brought to the precinct. In the interrogation room, Nick and Hank tried to get Tony to woge. Nick slammed Tony's head into a table and pushed him up against a wall, but Tony knew who Nick was and kept himself from woging, while also pretending to not know anything about the Wesen world. Nick and Hank knew, however, that Tony would not woge in front of them nor admit anything if he was part of Black Claw. As Nick and Hank left the room, he taunted them and said, "Had enough?"

Still being held in police custody, Nick and Wu entered an interrogation room to talk to him. He told them he still had nothing to say, and Nick told him that two detectives had taken his partner, Hank. Tony taunted Nick, facetiously saying that he was sorry to hear about that. He refused to say where he had been taken, and Wu then asked him how he'd hurt his hand. Tony claimed he'd tripped, but Nick interjected, "Over a Hexenbiest? Pretty, blonde, about this tall? I bet you were feeling pretty tough at the time." Tony said nothing at this, but Nick soon brought in Rosalee, who identified Tony as the man who'd hit her. Rosalee told him to tell the detectives where Hank was, but he only said that "Rosie" was pretty, especially when she was upset, hitting a nerve with Rosalee, who barely restrained herself from attacking Tony after he made that comment. Nick told him that they'd be "adding an assault," which Tony presumed was just another added charge, but Nick told him it wasn't his assault as he then entered the door and introduced Rosalee's husband, Monroe. Monroe looked none too pleased, and the look of fear soon came over Tony's face as Nick, Wu, and Rosalee left the room. Monroe woged into his Blutbad form and gave Tony a beating, making Tony believe that Monroe would kill him, and he got Tony to confess that Hank was being held at 521 Skyline Drive. After Monroe left, he thanked Nick and Wu, who looked in and saw Tony helplessly laying in the fetal position in a corner of the room. 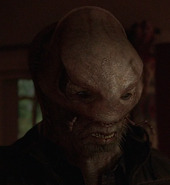 Add a photo to this gallery
Retrieved from "https://grimm.fandom.com/wiki/Tony_Talamonti?oldid=178424"
Community content is available under CC-BY-SA unless otherwise noted.