Sven Gunderson was a Varme Tyv who appeared in "Hibernaculum". He was the only Gunderson with misdemeanors on his record, and a booking sheet noted that he had snake tattoos up and down both of his forearms.

Attempting to go to a hibernaculum with his brothers, Knute Gunderson and Jalmer Gunderson, to hibernate during the winter, their car broke down, forcing them to split up in search of other heat sources. He killed a cab driver, stole his taxi, and then managed to get to the hibernaculum he had originally been trying to reach.

After Nick, Hank, Wu, and Monroe narrowed down the location of where he was staying, they found him hibernating among several other Varme Tyv. They were unable to get the other hibernating Wesen off of him without waking up everyone else, however. Sven and the others were upset that they had been woken up and that their hibernaculum had been found, forcing Nick, Hank, Wu, and Monroe to flee to a nearby barn. Sven and another Varme Tyv chased after them and forced their way into the barn, but Nick and Hank were able to subdue them after a brief fight.

Leaving the hibernaculum quickly affected Sven thereafter, and he froze to death in the barn, leaving Nick, Hank, Wu, and Monroe to decide what to do with his body. They ultimately put his body back into the cab that he had stolen, drove back to Portland, and ditched the cab with him placed in the driver's seat, where a woman later discovered it. 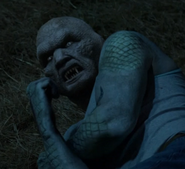 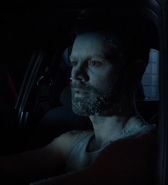 Retrieved from "https://grimm.fandom.com/wiki/Sven_Gunderson?oldid=199921"
Community content is available under CC-BY-SA unless otherwise noted.