Steiger is/was a pawn shop owner and an old acquaintance of Renard's who appeared in "The Seven Year Itch". He is well-versed in both the Wesen world and elements of the supernatural.

After a long time having not spoken, Steiger received a call from Renard, who told Steiger he needed to see him that night. Steiger told him, "I can't wait," and hung up.

That night, Renard came to Steiger's pawn shop, where Steiger stated that things hadn't been going so well for Renard. He told Renard that he'd voted for him as the next mayor of Portland and asked him why he quit, and after Renard told him that wasn't him, Steiger deduced that someone had used Verfluchte Zwillingsschwester on him. Renard continued to tell him that he was being haunted by Meisner after he'd died at Renard's hands in a mercy killing. ("The Beginning of the End") Steiger wanted payment from Renard in exchange for his help and got Renard to give him both a family ring and a golden ring he had on him. He took Renard to an area of the shop and revealed an Aspirateur d'Esprits, something that could be used to detect if any spirits were attached to Renard, which would then be pulled out. He instructed Renard to take off his clothes and step inside, assuring him that if his haunting was all in his head, nothing would happen. Despite being unsure, Renard did as he was told and got in the device. Once Renard confirmed he was ready, Steiger turned the machine on, which appeared to be working at first, but when Steiger went to touch the Aspirateur d'Esprits controls again, an electric shock sent Steiger falling towards the ground. Renard no longer saw Steiger get back up, but instead saw Meisner. 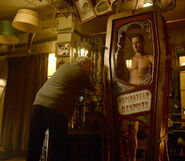 Add a photo to this gallery
Retrieved from "https://grimm.fandom.com/wiki/Steiger?oldid=184728"
Community content is available under CC-BY-SA unless otherwise noted.