Stefania Vaduva Popescu is the "Zigeunersprache," or Queen of the Schwarzwald Gypsies, a group of Romani gypsies. She first appeared in "Volcanalis".

Frau Pech brought Adalind Schade to see Stefania one night at her encampment. Stefania exchanged a few barbs with Pech but greeted Adalind warmly. She noted that the Schade family's roots ran deep in the woods around them, but those of the Schwarzwald gypsies ran even deeper. She then invited her guests into her tent to test the blood of Adalind's baby. After having her sons, Dragomir and Lucian, restrain Adalind so she could extract the child's blood, she confirmed the child was Royal and shared a drink with Frau Pech. She expressed irritation at Adalind's attempt to consume alcohol while pregnant and then offered 500,000 euros for a healthy boy or 750,000 for a healthy girl. Frau Pech scoffed, saying they could do better in Budapest, to which Stefania suggested they might not make it that far. Adalind cut in and demanded her powers back in exchange for the baby. Stefania was taken aback by this request and admitted that this might not be possible.

Stefania visited Adalind in her hotel room. She told Adalind that the recovery of powers was difficult but possible. She produced a contract for Adalind to sign, but, as it was written in the Roma language, Adalind couldn't understand it and refused to sign. Stefania then sprinkled some powder over the bottom of the document and pressed Adalind's hand onto the powdered paper. The veins on Adalind's hand became engorged, and when Stefania lifted Adalind's hand from the paper, a handprint in blood was seen on the document. She put the contract in her bag and left. Frau Pech observed her leaving Adalind's room, but Stefania did not see Frau Pech.

Later that evening, Adalind called to tell Stefania that Frau Pech knew they had met. Stefania was calm on the phone, but immediately after hanging up, she flew into a rage and proceeded to smash some ornaments while cursing Frau Pech's name.

Stefania called Adalind to inform her that she'd found a way to get rid of Frau Pech and invited her to dinner. Once there, Stefania explained to "Adalind" that she would enlist Pech to double-cross Adalind, and then when Pech arrived to negotiate a deal, she would have one of her sons garrote the elder Hexenbiest so her heart could be cut out to restore Adalind's power. An incredulous "Adalind" asked if that would work, to which Stefania replied that they'd find out. At that moment, Stefania's son, Miguel, appeared and garroted "Adalind," revealing the Romani queen had been aware she was Frau Pech all along. Stefania then stabbed her rival and ripped out her heart through her stomach.

After she removed Frau Pech's heart, Stefania placed it in a hexagonal box inscribed with many runes and sigils, sealing it with blood red wax. She apologized to Frau Pech's corpse, calling her an old friend. Stefania ordered one of her sons to call Adalind.

When Adalind arrived, Stefania walked her through the first part of the ritual. She had to cut off Frau Pech's hands and feet, then pluck out her eyes. She held a cauldron for Adalind to place the body parts in.

Stefania, Adalind, Yanko, and Miguel went to a field of flowers where Stefania threw the top of the box containing Frau Pech's heart into the air. It flew around until it finally landed. Stefania instructed Adalind to dig at that spot, put Frau Pech's body parts into the hole, and bury the body parts and box containing the heart. Only moments after Adalind completed the task, all of the flowers within several meters of the spot died as green, ghostly hands rose from the ground. A delighted Stefania announced that Adalind had been accepted. Stefania then told Adalind she had to pick all the dead flowers for the next ritual.

When they returned from the field, Stefania told Adalind that she had to put the dead flowers into Frau Pech's body cavity, but the flowers inserted themselves. Stefania informed Adalind that the ritual was going well and that "she" must like her (Adalind). Stefania then had Adalind sew up the corpse. When Adalind had completed the sewing, she complimented Adalind on her stitching and then told her to cut the thread with her teeth.

After a while, she handed Adalind a jar, telling her she would want to fill it. At that moment, a viscous red paste oozed from the body cavity. As Adalind struggled not to vomit, Stefania said to her that it was really very good for the skin and the baby.

Stefania was walking with Adalind, telling her that her baby was almost due and very active and that Adalind had to go into hiding. She then gave Adalind a mandrake root to chew on to slow the process down.

Stefania was called into Prince Viktor's office, revealing that she had betrayed Adalind and had actually been working with the Royals to get Adalind's baby. After Adalind's escape from the two Verrat agents, Viktor initially accused Stefania of tipping her off. Stefania denied these accusations and concluded that the tip-off must have come from Viktor's side, stating that someone close to Viktor was working against him. 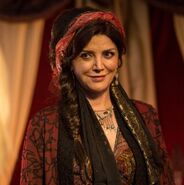 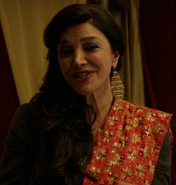 Retrieved from "https://grimm.fandom.com/wiki/Stefania_Vaduva_Popescu?oldid=183336"
Community content is available under CC-BY-SA unless otherwise noted.