They have been called the Black Widows of the Wesen world, and according to Monroe, there aren't many Spinnetods around.

When they woge, chelicerae emerge from their mouth, their eyes grow black or bright blue, including the sclera and iris, and their hands become gray and wrinkled, as well as clawed.

Spinnetods exhibit autotomy; that is, they can "drop" a segment of a limb (such as a finger) and regenerate it within a matter of days. Much like when an actual spider loses a leg, the lost segment of a Spinnetod's limb can still "twitch."

They, or at least female Spinnetods, are also extremely agile and fast. They can climb vertically with ease. Females are strong, stronger than both male Spinnetods and humans, and also appear to be as strong as Grimms.

They can secrete spider venom from their chelicerae as well, identified by the amino acid latroinsectotoxin.

Female Spinnetods are known to molt their skin every five years from an age presumably as early as 13, a process known as le retour d'age (the return of age). Before molting, they must devour a male's (Wesen or human) insides in order to expand enough to crack their outermost layer of skin.

Because Wesen (like humans) have three layers of skin, this molting must occur daily for a period of three days. If molting does not occur, the skin ages quite rapidly. The biological imperative is extremely difficult to resist, and a Spinnetod who manages to resist will be condemned to premature aging. Charlotte, who was able to resist the urges, looked as though she was three times older than her chronological age. There is no evidence that female Spinnetods enjoy killing men (they usually show signs of remorse before and after the kill), yet it is rare that one should be able to resist it.

The feeding process involves vomiting a sort of digestive juice into the victims mouth, liquefying their innards, then biting the abdomen of the victim and sucking out the newly digested material, known as dégueulasse (day-guhr-LAS; Fr. "disgusting"). This is most commonly done immediately following the seduction of a man. Monroe referred to dégueulasse as "gut butter."

Females are known to kill their mates shortly after copulation. This is evidenced by only one record of Spinnetods in Marie Kessler's library, an account passed along from a Japanese Grimm to another Grimm visiting Singapore.

Some Spinnetods choose not to live this violent lifestyle, and they are known as Wieder Spinnetod (VEE-dər SPIN-nuh-tod; Ger. wieder "again" + Spinnetod; "again" in this context refers to the concept of being (a) "born again," Ger. wiedergeboren, which is a common metaphor used to describe that someone has become religious and/or changed his/her ways). Wieder Spinnetods don't appear to need the strict regimen of diet, drugs, and exercise other Wesen like Blutbaden require. However, they must refrain from wearing shiny things because this encourages the Spinnetod impulses. ("Tarantella")

Unfortunately, female Wieder Spinnetods experience the effects of rapid aging since they are unable to molt without consuming human entrails. An example is the Spinnetod known as Charlotte, who's actually 26 years old but appears 70 due to her condition.

It's unknown if this aging effect merely results in the appearance of age or if the lifespan of female Wieder Spinnetod's are genuinely limited.

It seems that Wieder Spinnetods are more likely to live at a Klosterhaus, a retirement/monastic retreat home for wesen.

The Spinnetods are the "Black Widows" of the creature world, known for the gruesome way they dispatch their victims. Using sexuality to seduce, they liquefy the organs of their prey with a highly corrosive acid, suck them out and mummify the remains.

Plagued by a condition of rapid aging, they can only prevent it by KILLING AND SUCKING THE LIFE OUT OF YOUNG MEN, which also gives them a regenerative ability.

Traveling on a steamer from Singapore, I met a Japanese doctor by the name of Hasegawa who I was surprised to discover shared my abilities. He gave me the following scroll which describes a recent encounter with a previously unknown creature. I have had several passages roughly translated.

The Kyoto Geisha proved difficult to kill. Upon realizing my gift, she attacked, expelling some kind of toxic mucus. I was able to slay her by cutting open her stomach. Thankfully, she has no descendants.

I have encountered a creature. It is an attractive girl I recognize from a Kyoto brothel. Now that I know her true identity I can hunt her during the day.

A soldier was found at the Koshomon Gate. His body was completely mummified. This is the second body I've found like this in two days. Shogun Raiko asked me to investigate.

A Spinnetod stalking a man 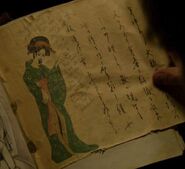 
I can look right at one person an he seems fine but then someone else right next to him looks upset... ripples run over her face and BAM, she's a crazy monster. I've never seen her before in my life and now she wants to kill me???

I HAVE TO BE STRONGER

I HAVE TO BE FASTER

I HAVE TO SURVIVE 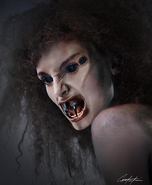 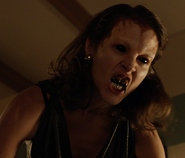 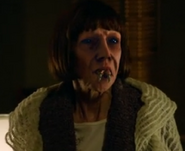 As depicted in the comic book series
Add a photo to this gallery
Retrieved from "https://grimm.fandom.com/wiki/Spinnetod?oldid=202064"
Community content is available under CC-BY-SA unless otherwise noted.