Like many other reptilian Wesen, Skalenzahne have a severe woge. They grow crocodilian scutes all over their body, rather than the scales of other reptilian Wesen. Depending on the lighting, they range from a greenish yellow to a yellowy brown. They lose their ears, which are replaced by two holes, one on either side of their head, and they lose their hair. They gain a short snout, and their mouth contains razor sharp teeth, which they can use to rip their food to pieces. Their scales go over their whole body. They also gain sharp reptilian claws, which can also casually rip humans to pieces.

They are incredibly strong and durable creatures having thick crocodile-like skin, and they are described as having no weaknesses. They are at least as strong as Blutbaden, and one was able to briefly fight a Grimm on an equal footing. They are described by a Löwen as being natural fighters. They also heal a lot faster, and can take much more serious wounds than humans can. During the fights Dimitri was in during "Last Grimm Standing", he was seriously wounded and lost a lot of blood several times but was fighting again within a few days.

Typically, these creatures exist peacefully among the human population, though it has been noted that they may attack without any provocation. ("A Reptile Dysfunction") Additionally, they can become barbaric when introduced to the taste of human or Wesen flesh. In this state, they will savagely kill all, even their friends. Once entering this state, they become incredibly carnivorous, devouring meat like a starving animal, regardless of what sort of meat it is. 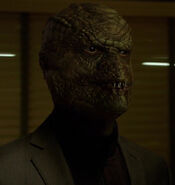 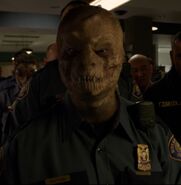 Retrieved from "https://grimm.fandom.com/wiki/Skalenzahne?oldid=202701"
Community content is available under CC-BY-SA unless otherwise noted.