Simon George is a member of a Native American tribe in Portland who was possessed by Mishipeshu. He appeared in "Mishipeshu".

After the murder of Larry Killburn at Carver High School, Nick, Hank, and Janelle Farris were able to find out through their investigations that there was a connection to Simon George, as Simon had been the target of anti-Native American graffiti at the school, and dropped out after he turned 18 in order to become more involved with his Native American roots. After talking to his spiritual guide, Hector Ballou, they were informed Simon had been on a power quest for three days, and it was unknown when he'd return or where he was.

However, soon after the murder of Killburn, Simon was running through the woods with blood around his mouth and on the front of his shirt. In a cat-like manner, he licked his hand and arm and started drinking from a stream, suddenly noticing that his reflection in the water was that of some type of creature.

Later, Simon was singing a Native American chant by a campfire when the same creature emerged from the ground and possessed him, his eyes then glowing a bright yellow. A possessed Simon went to Max McClay's house to kill him, but was prevented from finishing the job when Nick, Hank, and Janelle arrived. Simon, still possessed, jumped off from a roof in order to escape but seriously injured his right ankle in doing so.

Hector led Nick, Hank, and Janelle in a ceremony to join the dream world and find Simon, during which Hank entered Simon's past, saw how Killburn, Declan Henry Burke, and Max McClay beat his dad, Gus George, to death when Simon was just five years old, and ran off into the woods towards where Simon's father was buried. When Hank ran into the woods, he came across a totem of Mishipeshu, where Simon soon emerged from the woods after him. Mishipeshu then left Simon's body and possessed Hank as Simon collapsed to the ground. In looking for Hank, Hector, Nick, and Janelle then found Simon, on the ground and injured. Simon was unsure of how he had hurt himself but appeared to be himself again, as with the help of Hector, Nick was able to deduce that Mishipeshu would be going after Max McClay again because he was still alive.

Nick, Hank, Janelle, and Hector set up a sting to catch Mishipeshu at Max McClay's house, using Simon as the bait, pretending to be McClay. Mishipeshu did indeed show up at McClay's home, and its demeanor changed from aggressive to a much more passive one when it saw Simon stand up from McClay's chair and turn around. When Mishipeshu was dealt with and had left Hank's body, Hank described how he had somehow been Simon when he was five years old and had seen how McClay, Declan, and Killburn beat his dad to death in front of him. Simon became emotional when he heard Hank say this. When Simon returned to the vehicle where McClay was being held, he recognized McClay as one of the men who had killed his father and struggled with his emotions again as McClay dismissively told everyone to leave and walked back to his house. Hector then walked him back to the vehicle and advised Nick, Hank, and Janelle not to take the murder of Simon's father to court because of the possibility that Simon would be connected to the murders of Larry Killburn and Declan Henry Burke. 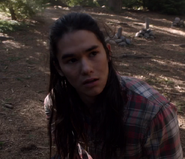 Add a photo to this gallery
Retrieved from "https://grimm.fandom.com/wiki/Simon_George?oldid=135444"
Community content is available under CC-BY-SA unless otherwise noted.