One way to administer the poison is by coating bullets of a Siegbarste Gewehr with it and shooting the Siegbarste. It calcifies the bones of the Siegbarste, shattering the ogre from the inside. Monroe used these poison coated bullets to shoot Oleg Stark in "Game Ogre".

It is very difficult to get, as it grows only on the north side of trees just below the timberline in Romania. Marie Kessler owned a bottle of this, which was passed along to Nick Burkhardt when she died. The fact that it is extracted from trees suggests that it is a tree sap-like substance in its natural form. Its smell is quite potent.

The Grimm who developed this poison contributed to Marie's Book.

After Juliette started a fire in the trailer, ("Iron Hans") Nick's bottle of Siegbarste gift was damaged, but it was later revealed that there was some still left that was salvaged. ("You Don't Know Jack") ("Cry Havoc") 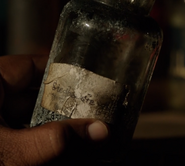 Add a photo to this gallery
Retrieved from "https://grimm.fandom.com/wiki/Siegbarste_Gift?oldid=189265"
Community content is available under CC-BY-SA unless otherwise noted.