Sheriff Doug Parcell is a sheriff who first appeared in "Endangered".

He was on the scene of the cow carcasses when Nick and Wu arrived. He explained that the cows hadn't been killed for the meat and that John had been killed by being pushed into a fencepost on the back of his truck.

He spoke to Elizabeth Eiger about the death of her husband, Allan, and how they were attacked by something in the lake. Elizabeth showed him a picture she had taken of the mysterious creature with her phone. He later called the Portland Police to request Nick and Hank's assistance because he knew they'd had some success with "unusual" cases.

When Nick and Hank arrived at the scene, he told them what happened. He told them that he didn't know what to think about regarding whether a monster really killed the victim, and he told them how the legend of the Diamond Lake Monster started back in the 1960s and that the working theory was that the monster was really an overgrown pet gator someone had dumped into the lake. He added that no one had ever been hurt before by this alleged monster but that there had been several sightings over the years.

Later, after another victim was killed in the lake, he told Nick and Hank that he was at a loss as to what could have happened and that, to his knowledge, there were no freshwater sharks in the lake. He led them to where the body of the second victim was.

The next day, Sheriff Parcell was at the lake once again, this time due to the deaths of Wayne Dunbar and Logan Cobb. He wondered why anyone would swim in the lake at night with everything that was going on and wasn't surprised Wayne was shot by all the people camped out at the lake trying to kill the supposed lake monster. Hank offered the idea that he was trying to drum up business for the shop and make people think he was a monster, which Parcell thought could be plausible, but he asked how a local drunk wound up dead in the lake with a broken neck as well. Nick said he didn't know and that he was starting to think there really was a monster. After Nick walked away, Parcell asked Hank if he was serious, and Hank replied, "You never know." 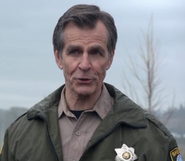 Add a photo to this gallery
Retrieved from "https://grimm.fandom.com/wiki/Sheriff_Doug_Parcell?oldid=165053"
Community content is available under CC-BY-SA unless otherwise noted.