Shaw Steinkellner was a Klaustreich and a member of the Secundum Naturae Ordinem Wesen who first appeared in "Cry Luison".

He was planning to attack Nick after learning that he was no longer a Grimm, but Trubel intervened and confronted him. Bud attempted to resolve things non-violently, but Shaw threatened to teach him a lesson after he finished dealing with Trubel first. He soon realized that she was Grimm, however, and he attempted to back down and promise that he wouldn't harm anyone, but Trubel didn't believe him, and she swung her machete and grazed his neck just enough to draw blood as a warning for him and his friends to stay away from Nick.

"The Grimm Who Stole Christmas"Edit

He hosted a Secundum Naturae Ordinem Wesen meeting at his house.

Shaw walked toward his truck as Nick and Hank pulled up. As they got out of the car, Shaw told them that he had told his "Grimm friend" that he didn't have any issues with him. Nick asked him where Monroe was and said he knew the Wesenrein had him, and Shaw said he didn't know what he was talking about. Hank said they thought he did know, and Shaw tried to run, but Nick and Hank quickly caught up with him and tackled him to the ground. As they handcuffed him, Hank found a Wesenrein mask in his pocket.

He was taken to an interrogation room at the precinct, where Nick and Hank were questioning him. Nick dropped the mask they found on a table in front of him and asked him to tell them about it. He pretended that it was a mask for Halloween and continued to joke around and play dumb with each question they asked. Nick then asked Hank to give them a minute, and Shaw watched Hank as he left the room to go stand on the other side of the one-way mirror with Renard. Nick demanded to know where Monroe was, and when Shaw continued to mock him, Nick slammed his head against the table. Shaw stood up, threatened to kill Nick, and woged, quickly realizing, much to his surprise, that Nick was a Grimm again. Nick shoved him against the wall, grabbed his throat, and demanded to know where the Wesenrein had taken Monroe, but Shaw replied that he'd rather be killed by a Grimm than cross the grandmaster, so Nick started strangling him and turned gray. Hank came in and stopped Nick before he could do anymore harm, and Renard came in as Shaw struggled to catch his breath. He told Renard that he was going to sue all of them and said he wanted a lawyer, but Renard told him that because there was "a more primal law at work" since he was a Klaustreich and Nick was a Grimm, he shouldn't push things. He then left the room as Shaw continued to collect himself.

Shaw was released and allowed to return to his house, but he received a call from Harold Johnson and was soon informed that the police were watching him. He walked out the back door and left the lights on as Harold directed him to, and he then got into a vehicle that Harold and the Grand Master himself, Charlie Riken, were sitting in. Shaw told Charlie that he didn't tell the cops anything, and Riken ominously replied that eventually, he would. Shaw pleaded that he would never do such a thing, but Riken woged and attacked Shaw, killing him. He then threw Shaw's body out of the vehicle and Harold drove off, leaving his body there. 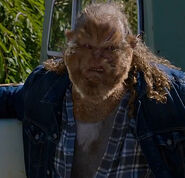 Retrieved from "https://grimm.fandom.com/wiki/Shaw_Steinkellner?oldid=198908"
Community content is available under CC-BY-SA unless otherwise noted.