watch 03:27
Wiki Targeted (Entertainment)
Do you like this video?
Play Sound

The seven keys are keys that belonged to seven knights who were ancestors to the Grimms. The knights worked for the seven families in the twelfth century. After sacking Constantinople in the Fourth Crusade, they took a treasure back but decided not to give it to their benefactors. Instead, they made a map on the keys, and each knight took a key. ("Bad Teeth") Among the Knights Templar who fought in the siege of Constantinople was Grigory Wolf of Zollern, Schwarzwald, believed to be the paternal ancestor of a Grimm, Josef Nebojsa, who formerly had three keys. ("Map of the Seven Knights") The keys, when put together, reveal the location of an unspecified treasure. The treasure is supposed to be an artifact so powerful that, if held by the seven Royal families, it would allow them to rule the world. According to Sean Renard, the Royals themselves don't know what the treasure is, but according to several legends, it could be either the prophet Muhammad's sword, the secret of alchemy, the secret to immortality, or the nails used in the crucifixion of Jesus, along with possibly even some pieces of the Cross itself. Renard also noted that it took the Royal families six hundred years and a great deal of bloodshed, even by their standards, to obtain just four of the keys, ("Endangered") although by the 21st century, it is apparent that Grimms had recovered at least two of those particular keys. ("Into the Schwarzwald")

Locations of the Keys[edit | edit source]

Since 2011, Nick has acquired five of the seven keys. He got his first key from his aunt, Marie Kessler soon before she passed away. ("Pilot") It wasn't until 2014 that Nick got his second key. Rolek Porter and his son, Josh, traveled from Philadelphia to Portland as Rolek wanted to give his Grimm memorabilia to Nick because he was very ill and dying, and Josh was not a Grimm. After Rolek passed away, Rolek's key was found in his cane and it was placed with Nick's other key under a floorboard in the spice shop. ("The Inheritance") In 2016, Monroe's uncle, Felix Dietrich, came to Portland to sell Nick some Grimm books after he acquired them in a chest from Andrea Stroh, who got the chest when Josef Nebojsa, a Grimm, passed away in Prague. Before any transactions could be completed, however, Felix was killed by two Black Claw Anubi who were after the books. After Nick and Monroe recovered the chest by killing the Anubi, they took the chest to the spice shop where Monroe noticed that the lock on the chest was bigger than it needed it be. He managed to pop the lock out to find a secret compartment where he found three more keys. ("Map of the Seven Knights")

The locations of the other two keys is currently unknown, and that knowledge was rendered academic when Nick was able to pick the remaining two locks, and the ultimate key proved to be the blood of a Grimm (Nick), which dissolved an unknown sealant on the metal box containing the treasure. ("Into the Schwarzwald")

For centuries, the exact location of the treasure was unknown, but Nick compared the partial map from his first key to an atlas, and the page from the atlas included the point where fifty-two degrees north latitude intersected the shoreline of continental Europe. When he showed Monroe, Monroe instantly recognized the map as a river in the northwestern part of the Swabian Circle, meaning the treasure was likely hidden somewhere in the Black Forest. ("Endangered") After putting the partial maps from both of Nick's keys together, Monroe confirmed that the map definitely leads to somewhere in the Black Forest. ("The Inheritance") After Monroe discovered three more keys in a secret compartment of Josef Nebojsa's trunk, all five of the keys' partial maps were put together, and Monroe was able to use three hills and the meeting point of two rivers as references to determine that the location of the treasure was somewhere just outside of Wolfach in the Black Forest. ("Map of the Seven Knights") Monroe and Nick traveled to the Black Forest and were able to find the treasure, located in a sealed bronze metal box, in an underground catacomb. ("Into the Schwarzwald") Once the box was unlocked and the seal was broken with Nick's blood back in Portland at the spice shop, Nick took the treasure back to his loft and hid it within a brick wall of the beginning of the tunnels adjacent to the loft. ("Lycanthropia") He later showed Trubel his hiding spot for the treasure, making she and Nick the only ones to know of its exact location. ("Bad Night")

Nick's key in "Pilot"; the look of the key has since changed

Part of the map created by Nick's key 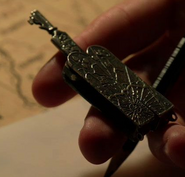 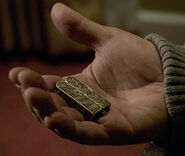 Behind the Scenes[edit | edit source]

Add a photo to this gallery
Retrieved from "https://grimm.fandom.com/wiki/Seven_Keys?oldid=202023"
Community content is available under CC-BY-SA unless otherwise noted.