The Secundum Naturae Ordinem Wesen (Lat. "Wesen (who live) according to the natural order"), also known as the Wesenrein (VEH-sin-rine; Ger. Wesen + rein "pure"), is an ancient organization founded during the Middle Ages to keep Wesen pure.

To them, inter-marriage is a crime against man and nature. ("Highway of Tears") They often use a Wolfsangel in some form as a warning to Wesen in an inter-species marriage. ("Dyin' on a Prayer") ("Cry Luison") ("Highway of Tears") Another type of warning they will carry out is to hang a dead animal outside the home or workplace of their targets as a "final notice" for the couple to split up. ("Chupacabra") Eventually, they will kidnap their targets with the plan to kill them by impaling them on a stake and burning them after a rigged tribunal. ("Chupacabra") ("Wesenrein") ("Tribunal")

I first encountered the Secundum Naturae Ordinem Wesen, also known as the Wesenrein, during a trial conducted by the Catholic inquisition. Not only were they searching out heretics and burning them at the stake, but some of the inquisitors, I discovered, were Wesen and using their positions to root out impurity within the Wesen society. The Wesen heretics, or as they were known, The Impuro, were tried outside the cities by secret tribunals. These brutal trials dragged on from one to three days, bereft of mercy.

They too were burned, not necessarily so much at the stake as through the stake. Seeing as the tribunals were doing my work for me, I took a much needed sabbatical on the Isle of Crete.

The Inquisition wear a mask to all their gatherings to hide their identities and allow them to kill without shame or fear of retribution.

I witnessed the tribunal members wearing this symbol on their robes. The Wolfsangel, or "wolf-hook" as it is translated from German, is taken to be a stylized representation of a kind of a baited iron hook hung from a tree historically used as a wolf trap.

The Wesenrein adopted it as a symbol of liberty and independence after its adoption as an emblem of revolt against oppression of the Wesen. It has evolved to also represent purity of their individual species 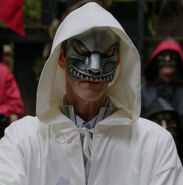 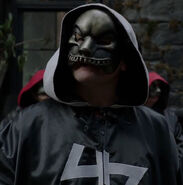 Retrieved from "https://grimm.fandom.com/wiki/Secundum_Naturae_Ordinem_Wesen?oldid=198983"
Community content is available under CC-BY-SA unless otherwise noted.