Sebastien was a member of the Resistance and an associate of Sean Renard. He first appeared in "Quill".

He called Renard to tell him that the family had sent a Nuckelavee to Portland to get Nick's key.

He called again to tell Renard that he had emailed a file about the Nuckelavee.

"The Hour of Death"[edit | edit source]

Renard called him while he was driving around Vienna. The confidant answered his phone in French. Renard asked him if the Royal Family had sent a Grimm of the brutal group, to which Renard's Confidant said he didn't know.

Renard and his confidant spoke on the phone. The confidant told Renard that Jacques had been killed.

He spoke to Renard in a restaurant in Vienna and agreed that he and Renard should meet in a bar in Portland, unaware that a businessman and member of the Verrat was listening in.

Sometime later, he met with Renard and informed him that Eric Renard was expanding his influence and expressed concern for working with the Resistance, but Renard told him that they needed to continue working with them for the time being. He then gave Renard an encrypted flash drive with names of key players in the Seven Houses. The businessman from Vienna tried to set off a bomb in the bar to kill the confidant and Renard, but Renard got rid of the bomb before it was set off.

The confidant met with Frau Pech at her request, though she was unaware of his connection to Renard. Pech spoke of a mother two months' pregnant whose offspring had Royal Blood, and she suggested that he tell Eric about it. Later, the confidant called Renard and told him what he found out, and he admitted that he would have to tell Eric rather than risk exposure. Both of them assumed that Eric would pretend to make a deal but then break it and take the child without paying. The confidant later broke into Eric's desk while the Royal was in Portland, looking for clues to Eric's master plan, and found passports without photos as well as death certificates.

He called Captain Renard and sent him copies of all the blank documentation: passports, death certificates, and transport licenses. He also informed him of the name Thomas Schirach and said that the folder for that name was empty.

Renard called him and told him to have Meisner take care of his brother and to look suitably shocked when Eric was killed.

Sebastien called Renard and informed him on what was happening in the castle. He told Renard of the police presence after Eric's death and that the families were fighting amongst themselves. He said that some of them suspected the Resistance to be behind Eric's death, while others suspected another Family. He additionally informed Renard of Frau Pech's absence and was instructed to investigate.

Sebastien later went to Frau Pech's home, broke in, and began to look around for information. He found a notebook with the number 315; he assumed this to be a hotel room number. He later found the hotel and the room and ordered room service for room 315 in order to see who is staying in it. He discovered that room 315 was Adalind's room and took her picture.

He sent Captain Renard the picture he took of Adalind, ("A Dish Best Served Cold") and then they discussed whether Adalind was selling the baby or if she was the mother.

Sebastien monitored Adalind as she left her doctor's office. A moment later, Meisner arrived and told Sebastien that Adalind was leaving an obstetrician's office. Sebastien said to him that he'd need Adalind's medical records as soon as possible but that they needed to be retrieved discreetly.

Sebastien arrived at an abandoned building, where Meisner and Renard were hiding. He told them of Prince Viktor, Eric's replacement, and that he was looking for the killer of Eric.

Sebastien later arrived with Meisner and Renard at the Resistance meeting place, and they were greeted by Franz. There, they witnessed the end of Breslau's "trial," after which he was executed by Meisner.

Sebastien was with Meisner and Renard in the Resistance meeting house. He later left to return to his position in Kronenberg Castle, not wanting to make Viktor suspicious.

In the castle, Sebastien discreetly warned Adalind of Prince Viktor's meeting with Gregor Danilov, the head of the Verrat. While he escorted Adalind to Viktor's office, he caught a glimpse of Danilov's photos of Meisner, Tavitian, and Frenay. He later called Renard to inform him of the photos, indicating that the Royals were closing in on the Resistance. He was then instructed to warn Meisner of the photos as well.

Sebastien escorted Stefania Vaduva Popescu to Prince Viktor's office. Listening quickly to their introductions, Sebastien found that Stefania had betrayed Adalind to the Royals. Renard, troubled by this, ordered him to get Adalind and her unborn child out of the castle by any means.

He later arrived with Meisner at Adalind's hotel room. While Meisner helped Adalind get essential supplies to leave, Sebastien scouted out the lobby. Soon, he saw two Verrat agents heading for Adalind's room and warned Meisner.

Sebastien then drove Meisner and Adalind along a lonely road, surrounded by forest. He let the two off on the road after Meisner told him it was best that he didn't know exactly where they were going and drove off.

"Once We Were Gods"[edit | edit source]

At the castle, Viktor called Sebastien into his office. Sebastien was offered a drink with Viktor, and Sebastien asked if he had done something wrong. Viktor said he had but that there was still time to make up for it. Danilov then entered the room, grabbed Sebastien, and told him to give up the names of his associates in the Resistance. He was then dragged off by Danilov.

Sebastien was later seen being tortured for information by Danilov, using methods such as waterboarding.

Throughout his ordeal, Renard tried numerous times to contact Sebastien, ending only in failure.

Sebastien eventually gave in to his interrogators and took them to the spot where he dropped off Meisner and Adalind, showing cuts and bruises all over his face.

Meisner, Adalind, and Adalind's baby arrived to the vehicles on the road that Viktor and the Verrat arrived in. Meisner checked on Sebastien, who was in one of them, and later gave him a pistol after he decided to stay behind to wait for the Verrat and Viktor to return. He was lying in wait in the remaining car when the group returned. He surprised and killed the three Verrat members, but he was out of bullets when he tried to shoot Viktor. After Viktor questioned him concerning the whereabouts of Adalind and Meisner, Sebastien confirmed that he didn't know, and Prince Viktor shot and killed him. 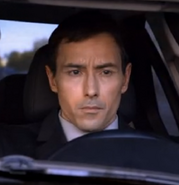