"Of Mouse and Man"

When Hank and Nick find out that the prints on the first two victims matched those from previous killings, they inform Renard. He states that he wants the killer found quickly before she can kill again.

Jordan Vance tells Captain Renard that the oily substance Hank found was a mixture of human fat and methane. Renard is surprised it is human fat because it is nearly impossible to get at huge amounts, like the that found at the crime scene.

Edgar Waltz visits Captain Renard at his home and requests Renard's assistance in tracking down a resistance member. Renard is indifferent, claiming the Verrat's concerns do not match his own. Disappointed with this response, Waltz shares the High Command has not been pleased that so many of the Resistance have found a safe harbor in Portland. Warning Renard he should be concerned with what the Verrat can do, Waltz leaves him with this message in Latin: "If you seek peace, prepare for war." 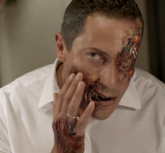 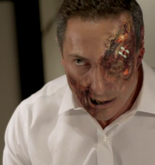 Retrieved from "https://grimm.fandom.com/wiki/Sean_Renard?oldid=36746"
Community content is available under CC-BY-SA unless otherwise noted.