A Scharfblicke (SHAARF-blik-uh; Ger. Scharf "sharp" + Blicke "sight," "look," or "view"; pl. Scharfblicken) is an owl-like Wesen that was first mentioned in "Bad Hair Day" and first appeared in "Face Off". They have extremely powerful vision and can still see in magnificent detail in a low-light environment.

Upon woge, they grow an owl-like plumage around their face and down their neck, and their hair becomes a part of the plumage. Their nose extends into an owl-like beak, and their eyes grow larger, gaining a bright orange iris. In addition, their eyes do not appear to have the limited movement of a true owl's. In this form, they possess incredibly powerful vision, able to see incredible details, such as the tumblers inside a lock, even in low light. However, this vision is only possible in their Wesen form, as in human form it is significantly less, demonstrated by the fact that Al Eckert wore glasses​​​,​​​​ ("Face Off") as well as by Lily Hinkley using a flashlight while venturing during nightfall. ("Death Do Us Part")

Not much is known about their behavior, other than that they are willing to do secret small jobs for people and to never talk about the job afterwards. Also, like many Wesen, they are afraid of Grimms.

Monroe once mentioned knowing one in grade school that was rather quiet, at which Rosalee Calvert immediately understood that they were self-conscious of their beak, so it is possible that this is a common reaction among Scharfblicke children.

YOU DON'T KNOW ME


I DON'T EVEN KNOW MYSELF!


How can you hate me so much? Who are you?


I think this guy was like an owl or something? Totally ran out of his shop and left me alone with all his merch, of course I took stuff but why did he run from me? It's really starting to bug me.


I think it's time to start collecting weapons, it seems like I always need something stronger, sharper, thicker or ... 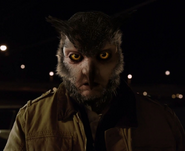 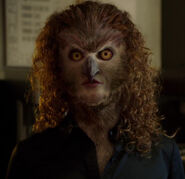 Add a photo to this gallery
Retrieved from "https://grimm.fandom.com/wiki/Scharfblicke?oldid=200637"
Community content is available under CC-BY-SA unless otherwise noted.