Sasha Roiz is an Israeli-Canadian actor. He is best known for his portrayals of Sam Adama in the science fiction television series Caprica and Captain Sean Renard in NBC's Grimm.

Roiz was born in Tel Aviv, Israel, to Russian Jewish parents. The family moved to Montreal, Canada, in 1980. Roiz studied history before joining a theater school in Montreal. He later graduated from Guildford School of Acting in England.

He has appeared in a number of popular television dramas, including CSI: Miami, House, NCIS, The Mentalist, Lie To Me, and Terminator: The Sarah Connor Chronicles. Roiz had a recurring role on Warehouse 13 as Marcus Diamond.

In 2008, he landed the role of Sam Adama on Caprica, a spin-off of Battlestar Galactica. His character is a Tauron enforcer for the Ha'la'tha crime syndicate on Caprica. Sam frequently goes head to head with his lawyer brother Joseph Adama, played by Esai Morales. His character is also the uncle of William Adama. On April 28, 2009, his role was expanded to series regular. He stated in an interview that it was later revealed to him that his character would in fact be gay, something he felt was an opportunity to explore the dynamic relationship of a gay character in a science fiction setting, as well as to explore the issue of homosexuality on a social level. In 2012, he guest starred in the second season of the Jane Espenson scripted romantic comedy web series, Husbands. In 2014, he portrayed Procolus in the historic drama Pompeii.

On March 24, 2014, Sasha Roiz was among the Grimm cast members who received an honorary badge from the Portland Police Department.[1]

From May through June 2015, Sasha was on the stage together with Silas Weir Mitchell and Lisa Datz in the play Three Days of Rain on Portland Center Stage. 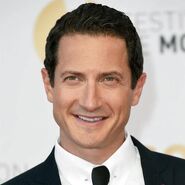