He met with Renard in Renard's office, and Renard told him he wanted anyone tied to the Wesenrein immediately. Sam asked him how persuasive he wanted him to be, and Renard said, "Extremely." Sam woged and said he'd see what he could do and then left.

Renard gave him everything he had on Kelly Burkhardt so that Sam could find her. He told him to report back if he found her so that she wouldn't know she'd been tracked down.

He met with Renard in his office and told him that Kelly sold the vehicle she was using three months ago to a couple in Spokane, Washington. He later went and told Viktor the same thing, additionally adding that the vehicle was registered to Juliette before being re-registered to the couple in Washington. Before leaving, Viktor asked him if he thought he could find Kelly, to which Sam replied, "Oh, I'll find her."

Sam returned to Renard's office to inform him that Viktor had been sent back to Vienna and that he had just found out about that himself. He told Renard that he did not know if he was even still alive and that he had not heard anything about Adalind. He added that he did not know who was replacing Viktor and suspected that nobody knew, or they at least were not telling him. He then told Renard that Viktor wasn't sent to Vienna because of his speedy progress with finding "Kelly Burkhardt and that child". Sam told Renard that if he wanted him to go meet with the Royals again, he better give him something he could show them. Renard then gave him a folder with some documents, stating it would make it look like he had made some progress. Sam asked him if any of it was true, to which Renard replied, "Enough to make it plausible."

Sam later arrived to where Adalind, Rispoli, and now Kenneth were staying, feigning surprise that Viktor was not there. Kenneth asked him if he had found Kelly or Adalind's child, and he responded that he had not yet but had made some progress. He took the folder Renard had given him out of his briefcase, which Rispoli took and gave to Kenneth. Sam then told Kenneth that Kelly sold her truck in Spokane, Washington and is still believed to be in the area with the child. Kenneth merely skimmed through the documents in the folder and then told him that the problem with being a double agent was that it was hard to know where his loyalties truly were. Sam firmly stated that he worked for the Royal family, but Kenneth did not buy it, telling him, "Not anymore," before giving him a vicious beating.

Sam was later forced to call Sean Renard, telling him that he gave the folder to the Royals and that Viktor was replaced by Prince Kenneth, whom Renard knew of but was unfamiliar with his branch of the family. Sam warned Renard not to underestimate Kenneth, saying he got the impression he didn't have much patience. He told Renard that he would have to deliver the Royals something real soon and that they couldn't keep stalling. He said that if they found out he was working for him, he was as good as dead. He persuaded Renard that it was too dangerous to meet in the latter's office, due to Sam no longer trusting the Royals and vice versa, and told Renard to meet him that night at 9 o'clock (per Kenneth's instructing) at the Willamette Paper Mill. He ended the conversation by telling Renard that he better have something to give them by then because his life was on the line, lastly adding, "Don't screw with me. You'll regret it." Kenneth then took a gun from Rispoli and killed Sam with a single shot to the head. 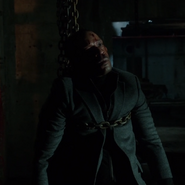 Add a photo to this gallery
Retrieved from "https://grimm.fandom.com/wiki/Sam_Damerov?oldid=176580"
Community content is available under CC-BY-SA unless otherwise noted.