Salvadore "Sal" Butrell is a Hässlich that appeared in "Leave It to Beavers".

He was on the planning committee, where in keeping with tradition, he bullied and exploited the Eisbiber. However, Robert Grosszahn stood up to him and refused to pay and also threatened to go to the district attorney. Angered by this defiance, Sal killed him by burying him alive in cement. However, he was spotted by another Eisbiber, Arnold Rosarot. Arnold called 911 but accidentally bumped into some tools while on the phone, which alerted Sal that someone was there. Arnold was just barely able to get away.

Nick and Hank learned that Robert Grosszahn "battled" with Sal, and this led to them going to his office to ask him some questions. Sal pretended to be saddened by the news of Robert's death, but when Nick asked Sal about the appointment Robert had put into his phone at 9:30 for the previous night with the initials "S.B.," Nick saw Sal woge into a Hässlich. Sal suggested that Robert had put the time of the appointment into his phone incorrectly, and when one of his employees entered his office, Sal had him verify his claim that he had been playing poker at his club with several employees the previous night. Realizing he had a problem, he called in another employee after Nick and Hank left and told them about seeing the Grimm.

Sal later told the two employees that the only option to resolve their current situation was to kill the Grimm. He told them that he had some connections to Reapers because his great-Uncle, Mamoose, was one. His employees were unsure about Sal's solution, but they had nothing to say when Sal asked them for other ideas. Sal later called the Reapers to kill Nick.

The Reapers called to set up a meeting; however, the Reapers didn't trust him, knowing that Nick was friends with a Wesen in Portland. The Reapers violently made sure Sal was not setting a trap for them. Eventually, Arnold Rosarot was convinced by John Oblinger and Bud to come forward, and ironically, while the Reapers were questioning Sal, Nick called him and said the police needed to ask him a few more questions. In order to convince the Reapers of his good faith and "deliver" Nick to them, Sal allowed himself to be arrested at his club so that the Reapers could follow Nick. At the precinct, Arnold identified Sal in a police lineup.

Later in his cell, Sal was confronted by Nick, who told him, obliquely, he had killed the two Reapers. 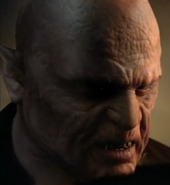 Retrieved from "https://grimm.fandom.com/wiki/Sal_Butrell?oldid=173196"
Community content is available under CC-BY-SA unless otherwise noted.