The reporter is a TV reporter for KPJK, and formerly MSNBC, who first appeared in "Three Coins in a Fuchsbau".

He interviewed Captain Renard after Renard's speech. He asked him if his speech was intended to launch a political career, but Renard said that his speech was only intended to be a warning to anyone planning to break the law in Portland.

He was one of the reporters at the precinct asking Captain Renard for information about the rumored Bigfoot attacks. He asked Renard if he could say who or what killed the two male victims at Bluff Creek and if there were any suspects. Renard answered that the police were following several leads and that as soon as they had more concrete information, the press would be the first to know.

He was one of the reporters present at the press conference that the mayor and Sean Renard held. He asked the mayor if they had found any connections to other victims because the killer was killing in the same way as Jack the Ripper, and he also asked if there were any notes left at the crime scenes.

He reported that newly elected Portland mayor, Sean Renard, would be making a victory speech.

He continued to report on site at the Benson Hotel on Sean Renard's decisive victory in Portland's mayoral election and how he had taken Andrew Dixon's place.

He was one of the reporters who came to the precinct to ask Renard, who was actually Nick in disguise, about his statements regarding abdicating the Portland mayorship and the manhunt for Nick Burkhardt. 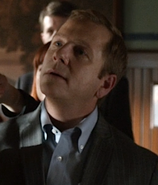 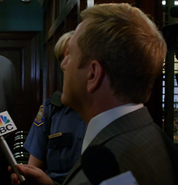 Add a photo to this gallery
Retrieved from "https://grimm.fandom.com/wiki/Reporter?oldid=182518"
Community content is available under CC-BY-SA unless otherwise noted.