A Reinigen (RY-ni-gin; Ger. "to clean") is a rat-like Wesen that first appeared in "Danse Macabre".

When Reinigen woge, their eyes become darker, their ears become larger, their faces become pointy, and their incisors enlarge.

While they don't have superhuman strength, Reinigen are quick and light on their feet, as Roddy Geiger was able to outrun Nick Burkhardt for a few seconds before the latter caught up. They also seem to have greater endurance, as one Reinigen was able to jump up and attack a bystander after just crashing their car, following which it ran through a glass door, and, despite being injured, proceeded to wreck an entire office without stopping. It should be noted that the Reinigen in question was in an aggressive state due to Fluvus Pestilentia, so adrenaline might explain his durability. They can also resist the effects of Fluvus Pestilentia for much longer than other Wesen, such as Fuchsbau and Stangebär. ("Quill")

Reinigen, or at least some of them, have incredible potential when it comes to music. They are able to utilize these abilities to mesmerize and control rats, similar to the way Mellifers control bees. ("Beeware") These abilities, however, may only be found in a select few Reinigen, as Ephram Geiger considered his son, Roddy, to be a prodigy.

In crisis, Reinigen will sometimes come together to form a Riesen-Ratte. This is a rare enough occurrence that most other Wesen consider a Riesen-Ratte to just be a myth. ("The Rat King")

They are similar to rats in that they are scavengers, not being the least bit picky about what they eat. The quality or hygiene of their living conditions is often poor as well. They appear to be peaceful creatures like their fellow rodent Wesen, Eisbibers, Mauzhertz, and Stangebärs, but unlike them (except Stangebärs), Reinigen are nowhere near as meek or cowardly. Still, they are very cautious in the presence of stronger Wesen, as seen when Roddy backed away from Monroe after realizing he was a Blutbad. Despite being cautious and generally non-violent, Reinigen can be very temperamental, especially if they have a history of being treated poorly. If a Reinigen loses his or her temper, he or she will lash out violently against their offenders. Reinigen appear to have a tendency to hold grudges.

Reinigen also appear to have an affinity for actual rats. For example, Roddy's father, despite being an exterminator, preferred to capture and release rats rather than kill them.

Monroe described them as being "at the bottom of the food chain" and hinted at them living on the leftovers of society.

Like many Wesen, Reinigen fear Grimms, but they are not particularly terrified of them, just merely wary in their presence. They become increasingly emboldened in the presence of a Grimm when they live in groups due to the fact that they can form a Riesen-Ratte together. Long-established groups of Reinigen form a social, monarchial hierarchy where one member is deemed to be a King, and the King's lineage is likewise considered to be Princes or Princesses.

Reinigen have a feud with Klaustreich, who like to harass and chase them around for sport in what is called Reini-bashing. Usually, a targeted Reinigen isn't killed, but it isn't an uncommon occurrence either. If the Reini-bashing occurs near a large group of Reinigen, the Klaustreich puts himself at risk of becoming the victim as the Reinigen may join together to form a Riesen-Ratte in revenge.

I've encountered a young boy and his father living as Reinigen and running a pest control business.

The young boy is extremely gifted with the violin but is also very troubled. His father is moody and on edge, probably as a result of years of disrespect at the bottom of the Grimm creature food chain.

I've learned from a trustworthy Blutbad that these rat-like creatures are rarely violent unless pushed to the limit. They apparently possess a musical ability that enables them to mesmerize and control the rat's behavior, similar to the tale of the Pied Piper. While I don't believe these creatures pose a direct threat to me, they have proven uncooperative and are difficult to deal with.
(By Theresa Rubel)
Today I caught a city bus downtown and the driver said I was short on fare. When I said it was all I had, he rippled and looked like some kind of mouse or rat or something. I swear I'm losing it. What is wrong with me?

Some days everything is normal and then this dude will look like an animal.

Most of the time I feel like its just me, but when I see them, they see me.

WHO IS THE MONSTER? ME OR THEM?

THEY CAN'T KILL ME IF I KILL THEM FIRST

Reinigen is rat-like Wesen who are quick, light on their feet. They also have incredible potential when it comes to music, having the ability to to mesmerize and control rats with their unusual talent.

Due to weak constitution, Reinigen always avoid melee, preferring to use their charmed minions to fight for them while fleeing away. Reinigen's songs grant enchantments to rats, making them much more dangerous than usual. Their bites hurt like hell and pass on blight disease. Now to mention it can also daze me, making my movement more difficult.

Even I kill the rats, the Reinigen manage to summon more of them, a powerfull I can't explain. 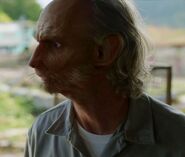 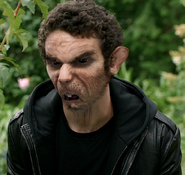 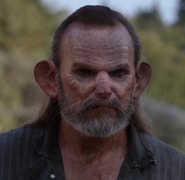 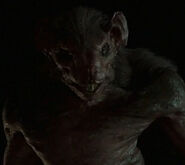 Add a photo to this gallery
Retrieved from "https://grimm.fandom.com/wiki/Reinigen?oldid=181667"
Community content is available under CC-BY-SA unless otherwise noted.