Reggie Valdez, known professionally as Reggie Lee, is a Filipino-American stage, film, and television actor. He played William Kim on the show Prison Break and also appeared as Hadras in Pirates of the Caribbean: Dead Man's Chest and as Tai Huang in Pirates of the Caribbean: At World's End. Lee also played Ross, a police officer in The Dark Knight Rises, and Lance Nguyen in The Fast and the Furious. He is currently playing the role of Sergeant Drew Wu on NBC's Grimm.

Valdez was born in Quezon City, Philippines, to Zenaida Telmo and Jesus Espiritu Valdez. Although fluent in English, he also speaks Tagalog. At the age of five, he moved with his family to the Cleveland, Ohio area, including Parma and Strongsville. While still a student, he performed in shows at the Greenbrier Theatre (now the Cassidy Theatre) in Parma Heights and was an intern at the Cleveland Play House. He graduated from Padua Franciscan High School in Parma.

Although accepted to Harvard, he instead decided to move to Los Angeles to pursue acting. He later changed his last name from Valdez to Lee, stating in a 2001 interview that "they kept calling me in for Hispanic roles, and I'm a far cry from Hispanic"; he took the name Lee from his grandparents.

In 1992, at the age of 18, he moved to Los Angeles, where he joined a national tour of Miss Saigon. He followed that with work as a dancer for Prince on the MTV Video Music Awards and toured nationally with the musical Heartstrings. He was in the original company of the 1994 Broadway revival of Carousel. In 1997, he received a Dramalogue Critics Award for his performance in FOB at East West Players, an Asian-American theatre organization in Los Angeles. With his critical acclaim, Lee also starred in their production of Carry the Tiger to the Mountain.

Since starring as Lance Nguyen in the 2001 Universal film The Fast and the Furious, Lee has also appeared as Hadras in Pirates of the Caribbean: Dead Man's Chest and as Tai Huang in Pirates of the Caribbean: At World's End. He has played Special Secret Service Agent Bill Kim in the FOX drama Prison Break, a character he describes as "a guilty pleasure to play, wonderfully complex and devious". He also appeared in the independent feature film Chinaman's Chance (2008), about which he said "It's an important story that definitely needs to be told and humanized. Plus I get to play pretend in the Old West. How great is that?"

In 2010, he played the role of Tom in the NBC television series Persons Unknown.

He currently plays Sergeant Drew Wu in the NBC cop drama Grimm. During the original casting, Lee had previously auditioned for the role of Hank Griffin, but lost the role to Russell Hornsby. The creators of Grimm decided to create the character of Wu, in order to have Lee in the show.

In 2012, Reggie portrayed Gotham City police officer Ross who is killed by one of Bane's thugs in Christopher Nolan's The Dark Knight Rises.

On March 24th 2014, Reggie Lee was among the Grimm cast members who received an honorary badge from the Portland Police Department.[1] 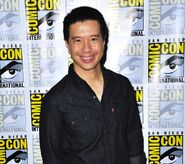 Retrieved from "https://grimm.fandom.com/wiki/Reggie_Lee?oldid=190034"
Community content is available under CC-BY-SA unless otherwise noted.