For the character, see Reaper.

Reapers are a society of bounty hunters dedicated to killing all Grimms.

Hulda had been tracking Marie Kessler, and he attacked her with a scythe while she was explaining to Nick Burkhardt the changes coming to his life. Marie was barely holding her own when Nick assisted. Hulda turned his attention to Nick, who killed him with his service weapon.

Another Reaper came to Portland to kill Nick and avenge his friend. He first went to the police station looking for information about his death, as it involved a police officer. Sergeant Wu informed him that information was not available. He was later forced to confront Captain Renard, who ordered him to leave and sliced off his ear when he didn't listen.

Monroe was lured to an unoccupied building through the offer of some work on a clock. He saw a Wesen on a second floor balcony and was immediately attacked by two other beings. He was knocked unconscious. When he came to, he found the symbol of the Reapers, a scythe, painted on the hood of his Volkswagen.

Sal Butrell called the reapers to have them kill Nick, as he had a great uncle named Mamoose who was one of them. The Reaper was worried about Renard finding out about him returning to Portland, but his partner said he would be expecting one reaper, not two. When they arrived in Portland, they contacted Sal and ambushed him, knocking him unconscious. They interrogated him, eventually finding out where Nick was and following him to "The Lodge." They ambushed him there, but Nick was able to fight back, having brought several Grimm weapons with him. After a tough fight, Nick evaded the blade, and the Reaper accidentally cut off his partner's head, angering him just when he was about to attack. Nick reached for his crossbow and shot him in the neck while the Reaper was distracted. Monroe arrived after Nick called him, and Nick said he needed to send a message. Monroe replied, "Two heads are better than one." He then grabbed the Reaper's scythe and cut off his head. The heads were delivered to Germany with a note saying, "Next time send your best."

It appears the majority of reapers are Hässlich. There seems to be a standard uniform, as Hässlich reapers are often clothed in a black trench coat and equipped with a hard-sided briefcase, which holds a large scythe. The scythe is the main weapon of the reapers, as well as being their symbol. The first scythe encountered ("Pilot") carried the inscription "Erntemaschinen von den Grimms," which is supposed to mean "Reapers of the Grimms." The second scythe ("Lonelyhearts") ("Leave It to Beavers"), owned by Reaper, has the words "Vernichter der Grimms" inscribed, which is German for "Annihilators of the Grimms," suggesting that the inscription is either a reaper's personal choice, or a symbol of the authority the reaper owner has.

Reapers are inducted into this organization by merit of killing a Grimm, and it's implied they recruit from Wesen ranks ("Leave It to Beavers"). It seems that reapers operate using monikers instead of their real names. Single names such as "Hulda," "Yannick," and "Junkers" have been used; it has been revealed that Hulda was actually a moniker of a man named Mr. Lindon. ("Pilot")

Very little on their hierarchy has been revealed, but they are at least subservient to Royals. ("Lonelyhearts") 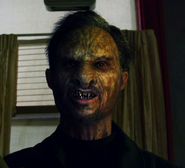