Ray Bolton was a Höllentier who appeared in "El Cucuy".

Ray Bolton was an initial suspect in the deaths of two robbers, Alfredo Guzman and Eddie Otero, as it appeared they were attacked by dogs, and Bolton kept ferocious dogs in cages in his front yard. When Nick and Hank requested to take his dogs in for DNA tests, Bolton angrily declared that his dogs hadn't done anything. When animal control arrived to test the dogs, Bolton tried to attack them, but he was pushed back by Nick, causing him to woge. Bolton recognized Nick as a Grimm and tried to attack him as well. He was then taken into custody by the two detectives. David Florez was nearby and taunted Bolton as he was placed in the back of Hank's police car.

While at the precinct, Bolton repeatedly denied killing Otero and Guzman. After another attack was made, Bolton was confirmed to not be the killer and was let go.

Bolton, accompanied by two associates of his, later confronted David Florez, who was surprised to find out that Bolton had been released. Bolton's two thugs beat Florez down as instructed by him, and Bolton then threatened to kill Florez if he came back.

After Nick and Hank arrived at Bolton's home with Mrs. Garcia to stop a fight between Bolton and Florez, Bolton was attacked by El Cucuy in his home and was viciously mauled and killed. 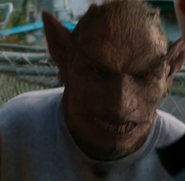 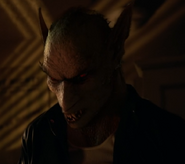 Add a photo to this gallery
Retrieved from "https://grimm.fandom.com/wiki/Ray_Bolton?oldid=161911"
Community content is available under CC-BY-SA unless otherwise noted.