Template:Episode Quote "Quill" is the fourth episode of Season 2 of Grimm and the twenty-sixth episode overall. It first aired on September 3, 2012 on NBC.

The episode begins with Ryan Gilko (a park ranger) sitting in his car listening to the radio. Suddenly another car rams him from behind. Then Gilko gets out and checks on the other driver. He finds a man covered in what appears to be a skin infection. The infected man fights with the Gilko and falls into a wall. In the struggle, Gilko woges into a Stangebär.

Nick explains to Hank about the basics of the Wesen world. They get paged and go off to their case. Meanwhile Juliette is frustrated that she still can't remember Nick. She calls Monroe and asks him how her relationship with Nick was before her memory loss. He can't tell her more than she already knows.

At the crime scene, the detectives find a completely trashed office covered with blood. They find the infected man, Stanton, who woges into a Reinigen and attacks them. Nick and Hank are forced to shoot, and Stanton falls dead. They interview the park ranger, but get nothing useful. Ryan Gilko goes to a female cop to get the police report for insurance purposes, but hits on her instead, causing her to back him off.

At the precinct, the detectives informs Renard that only ibuprofen was found in Stanton's bloodstream. Hank and Nick go home. Renard gets a phone call from a man who calls him by his first name, who informs him that the family has sent a Nuckelavee to Portland to get the key. Renard tells him that he will not let that happen.

Nick shows up at Monroe's house to talk about Hank. He says that he's told Hank everything. Monroe tells Nick that Juliette called him about their relationship. Nick is upset that Juliette still hasn't warmed to him, and leaves.

Juliette is getting something from the fridge when she suddenly has a flashback to the scene where Bud runs out midway through his job, and makes a reference to Nick  ("Danse Macabre"). Nick comes home, and Juliette shares her frustration with him. However their relationship is still cold.

Renard informs one of his officers to be on the lookout for the person that the family has sent. He asks the officer to keep it top secret.

Ryan Gilko wakes up from a nightmare. He goes to bathroom and we see an infected area on the back of his neck.

Rosalee opens her shop to find her shop in a complete mess. She sees that the cat has chewed its way out of its cage. The cat attacks her and she forces it out of her shop into the street. Monroe shows up and hears the cat being run over by a car outside. Monroe asks Rosalee if she'd like to go out for a picnic and she accepts.

Juliette comes downstairs to find the quilt that the Eisbibers made her, and she flashes back to the scene when Bud gives them the quilt and makes a reference to Nick again  ("Island of Dreams").

Renard is looking at the obituary info on Nick's parents when the officer he assigned the secret case to shows up. He tells Renard that he couldn't find the person, but a cab and its driver went missing 30 minutes after the person's flight landed. Renard passes by Nick and Hank's desk and gives them a vague warning about a fugitive who just landed in Portland.

Monroe and Rosalee go on their picnic in the woods. Ryan Gilko drives up to the same location, fully infected now.

Nick and Hank are in the morgue. Harper tells them that the infection is like the Ebola virus, but different. Hank asks if its contagious, and Harper reassures them that since they look pretty healthy after one day of contact, they should be okay. She runs some tests just to be sure. Hank wonders if Stanton was infected because he was a Reinigen. As they leave, we see a man watching them. He gets into a car and follows them.

Juliette invites Bud over for tea and asks him for help to jog her memory. She asks him about her relationship with Nick. The Eisbiber tells her that they were so perfect for each other and so in love. He accidentally lets out that Nick is a Grimm, but Juliette has no idea what that means. Bud realizes his mistake and nervously covers his track by telling her that a Grimm is a term for a "good cop". He hurries off.

Sgt. Wu runs a background check on Stanton and finds a woman's voice on Stanton's answering machine. Hank and Nick decide to dig deeper. Nick finds a page in his book that describes Stanton's symptoms. Hank gets a hit on Stanton's wife's job. She handles domesticated animals, especially pigs.

Sgt. Wu arrives at Stanton's house and finds it in disarray. He calls out for Mrs Stanton, but get no response. She suddenly appears, fully infected, and comes at him with a knife and screwdriver. Wu has no choice and shoots her several times. She falls dead straight onto him.

At the Stanton's house, Nick and Hank sees the wife's dead body. They notice a suitcase filled with files on pigs. They get a message on the police radio about the park ranger, and they respond.

Monroe and Rosalee get back to the shop and they share their first kiss. Monroe gets a call from Nick, who asks him about the 'yellow plague'. He informs Monroe that there may be an outbreak and asks if Rosalee can make an antidote. Meanwhile Rosalee seems extremely turned on, and while kissing Monroe, he sees a scratch with yellow bumps arond it on her neck and realises she's infected.

At the woods, Nick and Hank see Ryan Gilko coming towards them, but he suddenly collapses.

Monroe asks Rosalee to help him make the treatment for the plague, but she's already showing the symptoms and passes out. Monroe is forced to make it on his own. Nick and Hank come into the shop with Ryan Gilko. Rosalee escapes and Nick goes out to find her. Monroe manages to brew the treatment and forces it down Gilko's throat.

Nick finds Rosalee in a deserted alley but she charges towards him with a pair of scissors. He knocks her out and takes her back to the shop. They give Rosalee the treatment. Later on, they find that the lesions on Ryan Gilko has diminished, and the treatment seems to be working. Rosalee wakes up and thanks Monroe for saving her.

Meanwhile, the Nuckelavee sits above the shop, watching them.

A MYSTERIOUS OUTBREAK HITS TOO CLOSE TO HOME FOR MONROE AND ROSALEE – While investigating an accident site, Nick (David Giuntoli) comes upon a bizarre and gruesome Wesen disease that is spreading quickly. A romantic day out for Monroe (Silas Weir Mitchell) and Rosalee (Bree Turner) takes a dangerous turn when they encounter an infected creature that is out for blood. Meanwhile, Captain Renard (Sasha Roiz) gets a tip about a dangerous foreign fugitive who’s made his way to Portland. Russell Hornsby, Bitsie Tulloch and Reggie Lee also star. 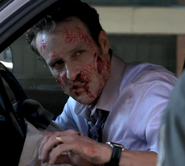 Harper and Nick in the morgue.

The picnic is ruined by an infected Ryan Gilko.

Phyllis Stanton dead in her own home.

Retrieved from "https://grimm.fandom.com/wiki/Quill?oldid=129100"
Community content is available under CC-BY-SA unless otherwise noted.