The Postman was a Blutbad who appeared in "Pilot".

During a jog through the woods, he killed and devoured Sylvie Oster, taking advantage of when she was momentarily distracted by a Hummel figurine she found near the jogging path that had been put there purposely by the Postman.

Later while he was delivering mail, Robin Howell, who was wearing a brightly colored red hoodie, walked past him on her way home from school. He stopped what he was doing and abducted her, taking her to his cabin in the woods to kill and eat later. He took her to a hidden area of the cabin via a trap door and took her out of a bag, placing her on a bed. She told him that she just wanted to go home, but he told her that she was home and then took off her red sweatshirt, hanging it up in a closet where there were at least four other red sweatshirts, revealing that he was a serial killer.

The Postman was traced to his cabin by Nick Burkhardt with the assistance of Monroe, who could pick up his Blutbad scent. Monroe left due to his concerns over not knowing whether or not he'd be on Nick's side once he got too close to the Postman, and Nick called Hank Griffin for backup. Just before they knocked on his door, the Postman could detect their presence. He pretended to be cooperative with the detectives, but he was clearly on alert, as evidenced by his eyes momentarily turning red when Hank entered the kitchen just as he was checking on his pot pie. He told Hank that he worked for the government as a postman, and then told Nick that he was on his route earlier that day during the same time that Robin went missing. Nick told him that a pair of boots led them to him, and the Postman told them to look anywhere they wanted to. Having not found anything, they went to leave as the Postman hummed a song by his fireplace. When he asked them if they needed anything else, Hank said no, and he and Nick left.

However, just after exiting the cabin, Hank realized the song that the Postman was humming was the one Sylvie was listening to on her iPod when she was killed, confirming him to be the culprit. The Postman watched them from inside his cabin and then shut off the lights after he saw them stop and start to talk outside. Hank and Nick returned to the house, kicking in the front door, but the Postman turned into his Blutbad form and attacked Hank in a dark room. He then attempted to flee, but Hank shot and killed him before he could get too far from the cabin. Nick demanded to know where Robin was, but the Postman could only muster, "Grimm," before he died. Nick managed to find the trap door in the floor, however, leading to the basement where Robin was being kept. 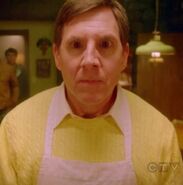 Add a photo to this gallery
Retrieved from "https://grimm.fandom.com/wiki/Postman?oldid=189249"
Community content is available under CC-BY-SA unless otherwise noted.