The attack on the North Precinct by Trubel, Hank, Wu, Eve, and Nick resulted in the deaths of many officers there. ("The Beginning of the End") It should be noted that an article later published in the Portland Tribune stated that this event, which was blamed on Conrad Bonaparte, ("Oh Captain, My Captain") caused "serious upheaval in the Portland's police department." ("El Cuegle")

Inside the South Precinct 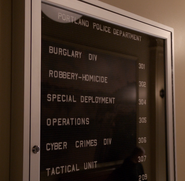