Detective Pogue is a detective working for the Portland Police Bureau who first appeared in "Thanks for the Memories".

He and Detective Meacham were assigned to the decapitation of Weston Steward. When Nick and Hank arrived at Nick's house, they explained to Pogue and Meacham that they were at a wedding and that Theresa Rubel, who was staying at the house, killed Weston Steward in self-defense after he shot Renard. Pogue and Meacham were then about to talk to Trubel, but the FBI arrived, and they joined the FBI as Trubel walked them through what happened.

Later, Trubel went to the precinct and gave a formal statement as Pogue and Meacham continued to question her about the circumstances surrounding what happened, while FBI agents Chavez and Rosten observed everything outside a two-way mirror.

He and Meacham were assigned to the Jack the Ripper killings. He told Renard how they thought they were at a dead end with the case until another prostitute, Judith Nichols, reported she was attacked. He informed Renard that she was also attacked in the area where the bodies of the first two victims, Mary Ann Casey and Heidi McDunnah, were found. He passed on to Renard the description Judith gave them of the attacker, and speculated that perhaps the three men that helped save her beat the killer to death.

Pogue and Meacham informed Renard that they believed they'd found their Jack the Ripper suspect after the body of a man named Kenneth Alun Goderich Bowes-Lyon was discovered. Pogue added that he had a passport from Luxembourg and that his accent was likely a match to the suspect description, and Meacham said that he had the murder weapon on him as well. The detectives then told Renard that they believed the three guys who had rescued Judith Nichols went vigilante and killed the suspect. Meachem lastly added that the suspect was apparently some kind of royalty and that a lawyer from Austria had called to request the return of his body, and Pogue commented, "If you care about that kind of thing," to which Renard said, "Not really," and instructed the detectives to finish wrapping up the case. He then complimented them on the work they'd done just before they left.

Having been temporarily paired up with Hank while Meacham was on vacation, he entered Renard's office and asked him if he'd told Hank yet. Hank said he did, and Pogue told him they had a crime scene to go to.

At the crime scene, Wu greeted them and led them to the body of Mr. Beau Childs and informed them of the situation. Hank and Pogue then questioned the witness, Paul Wemlinger, an employee of Mr. Childs' company. Wemlinger told them that he'd seen two men in ski masks running from Mr. Childs' office and that he tried to stop the bleeding when he went into the office. Wemlinger said that he then called the police, as well as Mr. Childs' assistant, Betty Frame. As they walked to speak to Betty, Hank asked Pogue if he believed Wemlinger, and Pogue thought the guy looked too harmless to be able to rip someone's throat out. When they questioned Betty, she said that everyone in the office got along well and that she came over as soon as she could and that Wemlinger sounded very upset on the phone.

Back at the precinct, Hank and Pogue did a background check on Wemlinger, but Pogue couldn't find anything on his record. Pogue was skeptical, but Hank convinced him that it was still worth bringing him in for questioning to "sweat him a little."

A little later, Pogue informed Hank that Wemlinger was in an interrogation room and told him about the M.E. report, which said that Mr. Childs' throat looked like it had been torn out by an animal. Pogue speculated that perhaps the murder weapon was a gardening tool, but he asked Hank what he was seeing that he wasn't, and Hank told him it was just a gut feeling. Just as they were about to enter the interrogation room, Wu came up to them and told them that the fingerprints they found at the scene matched Wemlinger except that it revealed Wemlinger was just an alias for Simon Kincaid, who had embezzled $975,000 from a bank he worked at three years before. Pogue then felt much more convinced as he went with Hank to question Wemlinger.

In the interrogation room, Hank and Pogue first asked about his work and why he was there so late along with Mr. Childs. Wemlinger didn't know why Mr. Childs was there so late and denied knowing about any missing money. They then started pressing him on Simon Kincaid and the bank he embezzled money from, but Wemlinger continued to deny knowing what they were talking about. Wemlinger stuck to his story from before, but Pogue pointed out that security cameras never picked up two men leaving the building. Hank then accused him of killing Mr. Childs because Mr. Childs had found out he was stealing money. As Wemlinger continued to deny the accusations, Pogue was taken aback as he watched Hank take Wemlinger by his collar up to the one-way mirror and accuse him of being Simon Kincaid because they had his fingerprints. Wemlinger turned around and looked at Hank before telling him that he didn't know what he was talking about and requesting to speak to a lawyer. Hank told Pogue to give him his call and left the room.

Pogue then went to the other side of the one-way mirror and was surprised to see Nick there with Hank. Hank told him he had asked Nick to observe the suspect while they were questioning him, and Pogue was bothered by this and told Hank to tell him the next time he wanted to bring somebody else in. He then informed the detectives that they had bigger problems to worry about because two US Marshals had just arrived to take custody of Wemlinger. The US Marshals showed Nick, Hank, and Pogue the warrant they had out for Wemlinger, and despite the fact he was a murder suspect, Pogue had to show the US Marshals where he was.

Sometime after Wemlinger was taken, Pogue spoke to Renard with Hank, convinced that Wemlinger was indeed a killer, and he told Renard that they had to find the murder weapon he used back at the office so they could charge him for murder along with embezzlement. Wu then entered the office and told them that the Marshals had just been killed at a gas station.

Hank and Pogue arrived at the gas station, where they were greeted and briefed by Franco, who warned them that the scene was bloody, but Pogue was still stunned by how bad it was when Franco led them to the gas station restroom and opened the door to show them the crime scene, where Pogue stayed for a while.

Later, after Wemlinger got tracked down to Betty's apartment and was killed by Wu, Pogue looked at pictures at the precinct of Wemlinger's body as well as Betty's, who had killed herself. Pogue tried to make sense of why Betty had jumped out a window, and Hank told him that she had nothing left to live for once Wemlinger was dead. Pogue then asked in disbelief if Wemlinger and Betty were sleeping together, and Hank replied, "Isn't it obvious?" as he left. 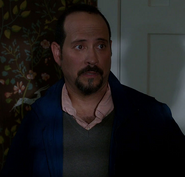 Add a photo to this gallery
Retrieved from "https://grimm.fandom.com/wiki/Pogue?oldid=189612"
Community content is available under CC-BY-SA unless otherwise noted.