A Wesen resembling a literal red herring that appeared in "Breakfast in Bed".

When woged, they have a prominent fish-like head with red-orange scales. Their head has a fish-like frill on top, and they have similar scaly frills on the sides of their neck where one may expect to see gills, as with Skalengecks. They lose the hair on their heads they have in their human form, and the rest of their body, including their hands, develops red-orange scales. Their eyes are also fish-like, and they have fairly sharp teeth that vary slightly in size, separated by several millimeters in their gum line.

Not much is known about this Wesen's behavior, other than that they tend to be reclusive and do not say much. Their nature is inherently mysterious and, in turn, can mistakenly lead to them becoming initial suspects in the course of criminal investigations. They appear to particularly enjoy raising such false suspicion surrounding themselves, however. Along the same lines, they appear to have what one may describe as a "unique," if not good, sense of humor. 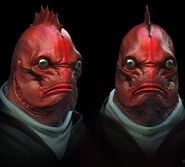 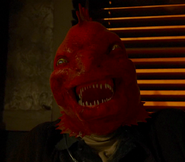 Retrieved from "https://grimm.fandom.com/wiki/Pista_Falsa?oldid=199727"
Community content is available under CC-BY-SA unless otherwise noted.