Pilar is a neighbor of Luis Alvarez who first appeared in "La Llorona".

Juliette Silverton translated Pilar's Spanish into English for Nick Burkhardt while they were at Luis Alvarez's home. Pilar saw the cat scratch on Juliette's hand and correctly described Juliette's recent trials. Her ability to do this was not explained. Later, Pilar also told Juliette that she would have to decide "between the two you feel for."

Once her memory started coming back and Monroe had shown her the trailer, Juliette called Pilar to talk about her confusion. Pilar went to Juliette's home and told her that she was trapped between two world, one of darkness and one of light, and that her journey was only just beginning.

Juliette came to Pilar's home asking for help about her multiple memories of Nick. Pilar explained to her that all of her forgotten memories were coming back at once, fighting for her attention. Pilar said that in order for Juliette to fix her present, she had to become part of her past, or else she would have no future. She then gave Juliette somewhat more practical advice and told her that focusing on one memory at a time was the key to unlocking her memories.

Juliette brought Nick to Pilar's house in the hopes of finding more information on El Cucuy, a bogeyman-like figure who was blamed for a series of brutal attacks in Portland's Spanish-speaking community. Pilar told Nick and Juliette of a series of El Cucuy attacks during her childhood in Guadalajara. After hearing the women of her neighborhood cry out for justice, the criminals and malcontents of the area were mauled to death one by one. Pilar theorized that El Cucuy could hear cries for justice from the women of a community and that it traveled from neighborhood to neighborhood to exact vengeance on their behalf. 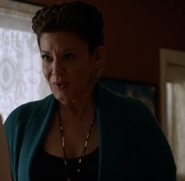 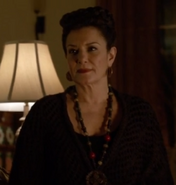 Retrieved from "https://grimm.fandom.com/wiki/Pilar?oldid=172330"
Community content is available under CC-BY-SA unless otherwise noted.