A Phansigar (FAN-sih-gar; Urdu پھانسی (phansi) "to hang (someone)" + Per. گر (gar) "doer") is a Komodo dragon-like Wesen that first appeared in "Highway of Tears".

Phansigars look similar to their cousin, the Skalengeck, but they have a long, retractable tongue that they use to choke their victims. When they woge, they lose all of their hair and have yellowish-green scales that cover their whole body. They also possess sharp teeth and claws, which they will use in combat.

Phansigars were once affiliated with the Thuggees. However, Phansigars have their own specific rituals for human sacrifice. Every three years they sacrifice one man and one woman, usually a couple, to the goddess Kali by choking them with their tongues to knock them out, and then, after a ritual involving prayers in Hindi, the victims are buried alive.

These sacrifices take place in front of a giant idol built in the Phansigar's image. Phansigars consider the ground on which they commit these sacrifices sacred and will kill anyone who trespasses upon it. They also leave similar, smaller idols behind at the sites where they kidnap their victims.

After six weeks in the foul bustee, I encountered my first. It attacked. Fortunately, I had my dagger and was able to slit its throat before it was able to tighten its tongue around mine.

Upon close examination, I have concluded that the Phansigar is a particular type of Skalengeck, not dissimilar to the visage of the Komodo dragon.

Here in India, the Phansigars hide among the Thuggees, the dreaded Hindu cult of thieves that strangle travelers as a sacrifice to Kali. But I have discovered that the Phansigars have their own brand of human sacrifice. Using their filthy tongues, they choke their victims into silence. These unfortunate souls, always a young couple, are then buried alive. This evil practice must be performed every three years to placate Kali. 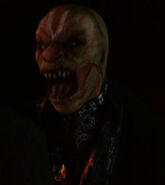 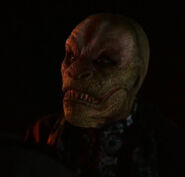 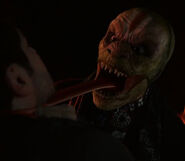 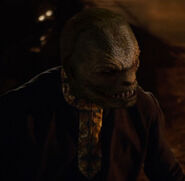 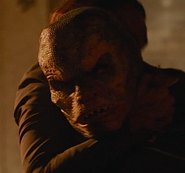 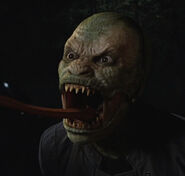 Retrieved from "https://grimm.fandom.com/wiki/Phansigar?oldid=188907"
Community content is available under CC-BY-SA unless otherwise noted.