Peter is an Apgadnieks who appeared in "Lost Boys".

Peter, Lily, Big John, and Miguel were chasing after Wendy Henley, who was trying to escape from them. She ended up slipping and falling down a steep hill by a road, which caused her to hit her head with such force that it killed her. The kids ran up to her body, and Peter checked to see if she was still alive, but he told the others, "Mother's left us." They were forced to hide in the woods nearby when they heard a truck approaching. As they looked on at a rancher checking to see if she was alive, Peter woged his eyes as he said that they were going to find another mother.

Later, back at their makeshift home, Big John took the blame for Wendy having got away as Peter prepared some tea. He asked Peter if she had tried to escape because of what they were, but he replied, "Real mothers would never abandon their children. No matter what they were," adding that she deserved to die. He then went over to give Lily the tea he'd made and urged her to drink it and get some sleep, but Miguel said she needed to take real medicine and see a doctor. Lily was worried she'd be sent back to a foster home, so he told her that they had no choice but to go into town to get some medicine.

Peter and Big John first went to a convenient store, but the presence of a security guard made them go to the spice shop instead. Big John tried to distract Rosalee by breaking some glass while Peter attempted to steal some goldenseal, but Rosalee caught him before he could get away. He woged when she said she was going to call the police and tried to attack her, but she grabbed his arm and took him to the floor. Rosalee demanded to know where his parents were, and he told her that he didn't have any and that the medicine was for his sister. He told Rosalee that he didn't have any money and that he didn't live anywhere, and Rosalee then let him go with the goldenseal. Peter asked her why she wasn't scared of him, and she said she'd seen worse.

On the way back to their home in the woods, he and Big John were talking about Rosalee when Big John almost fell through one of the nearby traps they had set up. Peter told him he needed to be more careful and to stop forgetting about the traps.

He returned to the store with the rest of his brothers and Lily, and when she told her that her brother was there, he put a chloroform rag over Rosalee's mouth, and the kids abducted her. On the way back to their home, Peter held the end of some rope that had been used to tie Rosalee's hands together as she lay unconscious in the back of a car. He tried to calm her down when she came to, and Rosalee asked him why they were kidnapping her. He told her that they needed her, and she asked him where they were taking her. After she asked a second time, he replied, "Home."

When they arrived, Rosalee resisted getting out of the vehicle, but Peter told her she was now where she was going to be living. He had Big John get her out and warned her that if she tried anything, he'd have to hurt her.

He later brought Rosalee a blanket and told her that he couldn't untie her yet because other mothers they loved had abandoned them in the past. He told Rosalee that she'd get used to living with them and "being loved," but Rosalee countered, "You don't kidnap loved ones." He then warned her that if she even thought about running away, he'd find and kill her himself. He woged, adding, "You're in our world now."

When Rosalee was served some dinner, Miguel and Big John started to argue when he entered and got them to stop fighting. He looked on expressionless as Rosalee ate some berries, much to the delight of Miguel and Lily.

As they got ready for bed, Big John asked Rosalee if she could tell them a story that had fighting in it, and she lulled them all to sleep with a story about Wesen and Grimms. In the process, Rosalee realized that they didn't know what Wesen or Grimms were.

Lily's coughing woke everyone up soon after Rosalee had run off, and they quickly ran to find that she'd fallen in one of the traps. Lily asked Rosalee why she ran off, but before she could say anything, Peter told her it was because she was a bad mother. Once she was pulled out of the trap, he told her that she had been warned; everyone but Lily then woged, but as Peter started walking towards Rosalee, growling, she replied that things had gone far enough and woged into a Fuchsbau, revealing to the children that she was similar to them, which got them to retract. Lily then went up and hugged Rosalee, seeing that she was like her, but Peter soon heard someone coming. Rosalee told them it was her husband, Monroe, but he was joined by Hank and Nick as well. Peter tried to attack Monroe but was soon subdued, and they were all taken to the precinct.

At the precinct, Rosalee apologized that she couldn't be their mother and wished she could help them. They were then placed in a ward, where the boys met Warden Hooke, who woged into a Schakal to get them to show them their Wesen side. Warden Hooke then told them that he was giving them the chance to join others like themselves and that they didn't have to hide who they were. He had them repeat the phrase, "Occultatum Libera," and Peter asked what it meant. Hooke replied that it meant they had a new family. 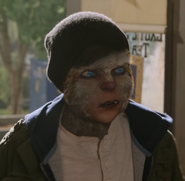 Retrieved from "https://grimm.fandom.com/wiki/Peter?oldid=153482"
Community content is available under CC-BY-SA unless otherwise noted.