Olga Myshkin is a Malin Fatal and the wife of Boris Myshkin who appeared in "Red Menace".

Olga rushed off to get her husband, Boris, tea after he stumbled backwards into a chair in discomfort after healing a girl.

Later, Olga was weeping alone in her room, holding a phone, until Larissa Komarov came in with towels. Olga confronted Larissa about Boris before ordering her to get out and then woged into a Malin Fatal.

When Nick, Hank, and Renard came to the Myshkin's house to talk to Boris, Olga tried to discourage them by telling them Boris was doing some healing, but they were adamant. After Boris finished his healing, they approached the exhausted Boris and asked him about the restaurant murder. Olga warned her husband in Russian not to trust the police, but Renard interrupted, also speaking in Russian.

Later when Boris and Olga were talking, Olga revealed that she wasn't sure if she still cared about him. Larissa entered, and Boris asked for vodka. Olga smiled and shoved a bottle into the maid's hand. After Olga left, they began to flirt and ran off to "make a scandal." They scampered up the stairs playfully, as Olga watched from downstairs, her eyes wogeing into a yellow glow. Nick, Hank, and Renard rushed into the house, and Olga told them that Boris was upstairs in their bedroom with Larissa just as Larissa stumbled out, followed by Boris with a pair of scissors impaling his chest. Larissa stumbled down the stairs into Olga, who woged and slit her throat quickly with her tusks. Nick ordered her to get down, unfazed, and she realized that he's a Grimm. Renard tried to save the heaving Larissa by stopping the bleeding, but Boris staggered over and told them to move. Olga cried that it would kill him, but he healed Larissa anyway. He then collapsed at Olga's feet, muttering, "Forgive me," before he died. Olga wept as Nick called an ambulance. 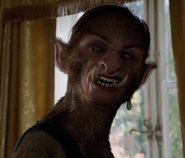 Add a photo to this gallery
Retrieved from "https://grimm.fandom.com/wiki/Olga_Myshkin?oldid=134678"
Community content is available under CC-BY-SA unless otherwise noted.