Their appearance resembles that of a skinless horse's head with black blood pulsing through transparent veins, their muscles and sinews also being visible. When woged, they have a long mane of hair, horse-like teeth, grayed skin, and hooves. Of the species, the female has the more severe woge, as males have a shorter nose and keep their hair, while females lose their hair, have their heads change shape more severely, and gain more horse-like muscle.

Nuckelavees are a physically strong species and able to hold their own against a Grimm. Nuckelavees are also a quick and stealthy species. When attacking in their Wesen forms, Nuckelavees use their hoof-like hands (all the fingers with the exception of the thumbs) as blunt weapons, which combined with their impressive strength, are at least capable of leaving large dents in the outer hull of car trailers.

Nuckelavee are stealthy, quiet, and calm Wesen that approach tasks logically. They have no qualms with stealing or murder as long as it helps them to succeed in their appointed task. As such, they are able to find employment working for the Seven Royal Households. They also possess incredible determination and would rather die than fail at their tasks.

Compared to the Hundjäger and Mauvais Dentes, the Nuckelavee seem much more honorable in that they only go after the intended target and leave all bystanders unharmed, as seen when David Esquibel left Juliette alone after realizing that the key wasn't in her house. However, this may be due to the fact that he appeared to be trying to be stealthy and remain unnoticed by Nick or anyone else. 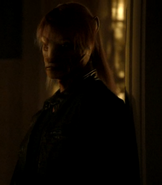 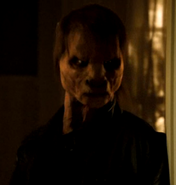 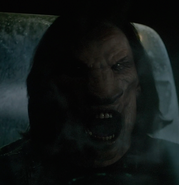 Retrieved from "https://grimm.fandom.com/wiki/Nuckelavee?oldid=178691"
Community content is available under CC-BY-SA unless otherwise noted.